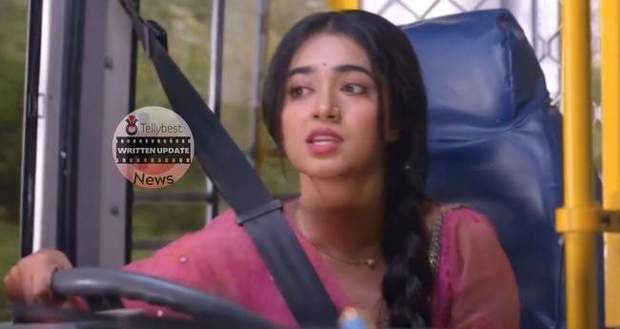 Today's Radha Mohan 4th November 2022 episode starts with Radha running the bus over the cones being unable to handle the bus.

Meanwhile, Kaveri goes to Kadambari and tells her that Damini is going to remove the Raksha Kavach to let Tulsi go out of the house and save Mohan, Gungun, and Radha.

Kadambari says that it is a good idea while Kaveri reminds her that Tulsi might take Gungun and Mohan with her if she's let out.

At the same time, Damini is acting in front of Tulsi and tells her that she is going to set her free so that she can save Mohan.

Damini keeps on acting of trying to open the Raksha Kavach while Kadambari comes there and stops her.

Kadambari scolds Damini and tells her that Tulsi might take Gungun and Mohan to the afterlife with her.

Tulsi shouts that she will not take them instead wants Mohan and Radha to get married.

A vase falls scaring Kadambari and Damini agrees with her after which they leave the house to go to the site.

Damini reaches the police tent and the police officer informs her that they have put up two barricades to slow the bus and the third one to stop the bus at last and catch the culprits.

Meanwhile, Radha manages to overcome the first two barricades while the third one scares her.

After some thinking, Radha speeds up the bus even more so that the barricades do not impact her when the bus slows down a little bit and they can pass through the barricades.

Mohan calls Radha smart and prays to Lord Bihari saying that they have to help him save Radha and Gungun.

The bus manages to go through the barricades but Radha gets injured on the head in the process.

Mohan feels proud of Radha and turns the jeep around to go to the police tent.

The rest of the family also reaches the police tent while Mohan arrives there and informs everyone that there is a bomb in the bus that will blast if the speed goes under 60 kmph.

Mohan reveals that he relayed this information over to Damini but Rahul reveals that Damini didn't inform them of such a thing.

Damini makes an excuse that she couldn't hear Mohan properly due to a network issue.

Further, Ajeet tells Mohan that they should go after the bus to give strength to Radha.

The police officer mistakes Radha for Mohan's wife and praises her while Damini shouts that she is going to marry Mohan, not Radha.

Damini asks the police officer about the plan when the media comes there and hoards the place.

Meanwhile, Mohan and Radha bicker with each other with Mohan in his jeep and Radha driving the bus while they confess that they won't leave each other.

Further, the police officer calls Mohan and Mohan gives one phone to his sister through the window.

The police inform them that they have to take the bus towards the hill where they will have a trailer driving alongside the bus by which they will rescue the kids.

However, before the police can give information about the driver (Radha), Damini disconnects the call.

© Copyright tellybest.com, 2022, 2023. All Rights Reserved. Unauthorized use and/or duplication of any material from tellybest.com without written permission is strictly prohibited.
Cached Saved on: Monday 21st of November 2022 06:15:34 AMCached Disp on: Thursday 1st of December 2022 12:02:28 PM