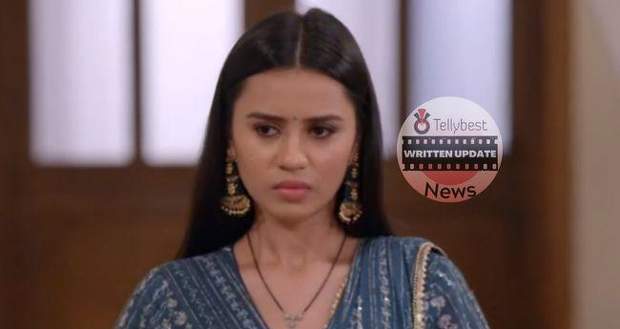 Today's Radha Mohan 4th October 2022 episode starts with Mohan saying that Rahul will be handled by the police now while Kadambari snatches Mohan's phone and begs him to forgive Rahul for the last time.

On the other hand, Rahul tells his mother to not apologize as he did nothing wrong.

Further, Radha tries to say that Damini is the culprit while Mohan states that Damini knew about their plan and leaves from there.

Damini tells Radha that she has done a big mistake by doubting her.

Rahul gets hurt and tells Gungun to not call him from now on as he is not a human being according to his father.

Rahul leaves while trying to hide his tears while Damini and Kaveri think that they have to do something to get Radha out of the house as soon as possible.

On the other hand, Radha tries to console a sobbing Gungun while Gungun reveals that it was Damini who told Rahul to dress up in a saree.

Tulsi also states that she knows how much Rahul hates Radha but his love for his niece, Gungun is bigger.

Mohan comes there and Gungun runs away from him while Radha goes after her trying to comfort her.

Elsewhere, Rahul cries after being betrayed and humiliated by Mohan and states that he will not leave Radha as she is the root cause of all the problems.

At the same time, Damini comes to Radha and gives her a vase as a farewell gift.

However, Radha drops the vase and states that she does not need a farewell gift as she is not leaving.

Radha further accuses Damini of being Hriday's accomplice while Damini acts innocent and calls her crazy.

Radha brings forth all the evidence and instances which prove that Damini is the one who is behind it which leaves Damini speechless.

Radha questions Damini about how she knew where she met Rahul and reveals that she knows Damini got insecure seeing her and Mohan getting closer.

Radha looks at Damini accusingly as she tells her that she is naive but not dumb and knows that Damini is behind everything.

© Copyright tellybest.com, 2022, 2023. All Rights Reserved. Unauthorized use and/or duplication of any material from tellybest.com without written permission is strictly prohibited.
Cached Saved on: Monday 21st of November 2022 07:42:29 AMCached Disp on: Tuesday 29th of November 2022 10:13:29 AM