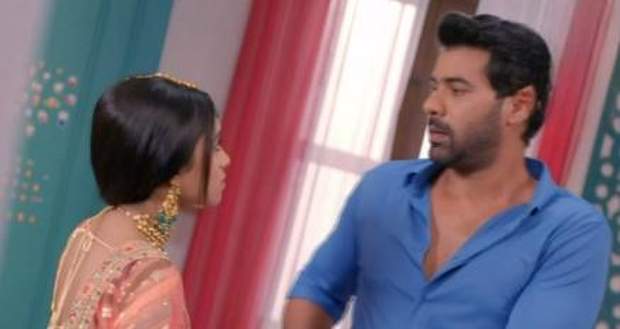 Today's Radha Mohan 5th August 2022 episode starts with Trivedi Ji holding Hriday from the shoulder while Kadambari welcomes him saying he has come on an auspicious day.

Trivedi Ji asks Hriday who he is while Panditji tells him that Hriday is his son-in-law to be.

Kadambari introduces Trivedi Ji to Lata and Hriday saying he has gone to Nainital recently for some work.

Hriday gets worried about being recognised and goes away under the pretext of finding his mother’s medicine.

Trivedi Ji has brought Gulgule for Ketki which is wrapped in the newspaper that has news of Hriday's crime.

Meanwhie, Hriday tells Lata that if Trivedi recognises him then he will be trapped and if Damini finds out then she will send him packing.

In the meantime, Kaveri asks Damini if she is sure that it was Tulsi who slaps her while Damini is worried that Tulsi might have found out about Hriday and her dealing and that is why she does not want Radha to marry Hriday.

Meanwhile, the newspaper cutting that is floating in the air reaches Damini’s hand and she is shocked to see the Hriday in the news.

Before she can remove the evidence Kadambari comes to her asking for preparations.

Meanwhile, Dulari takes away the curtains where Damini has hidden the news cutting.

After a while, Dulari comes to Mohan’s room to take the bedsheet and drops the newspaper cutting there.

Afterwards, Radha is learning to do video calls and dial Mohan.

As Mohan picks up her phone, Radha tells Mohan that the ring was stuck on her finger but is surprised to see that it is loose again.

Mohan tells her that it is a sign that she should not marry Hriday and tells her to go to sleep as she has another function tomorrow.

Later, he hears Radha telling Gungun that she loves Mohan and is shocked to hear her however, she only means to remind Gungun of her love for her father.

Radha prays to God to make Gungun love Mohan and asks for a miracle.

Mohan realises Radha’s worth in the house and thinks of a way to stop her from leaving.

Meanwhile, Damini tells Hriday about the paper cutting and asks him what did he do in Nainital.

Hriday tells her that he has done a small theft that the paper has exaggerated.

Damini tells him to not let the paper cutting get in anyone’s hand else everything will be spoiled.

The next day Damini is worrying about the paper cutting while it gets into Radha’s hand.

© Copyright tellybest.com, 2022, 2023. All Rights Reserved. Unauthorized use and/or duplication of any material from tellybest.com without written permission is strictly prohibited.
Cached Saved on: Wednesday 25th of January 2023 02:46:57 PMCached Disp on: Thursday 9th of February 2023 08:41:01 AM