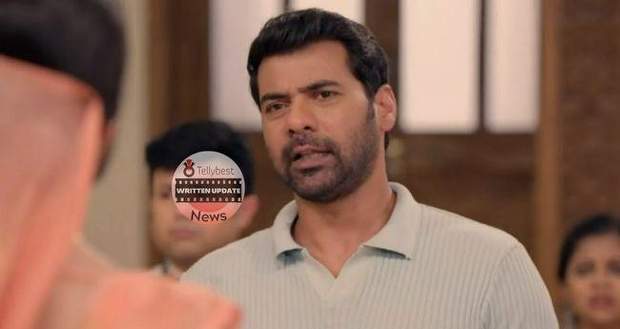 Today's Radha Mohan 5th October 2022 episode starts with Kadambari slapping Radha and asking how dare she put such a big claim on Damini as she is the Trivedi family's daughter-in-law.

An angry Kadambari refuses to believe that Damini can think ill of the Trivedi family and states that it is Radha who is an outsider.

Damini smirks in the background thinking that Kadambari's training seems complete now while tears pour out of Radha's eyes as Kadambari accuses Radha of trying to break her family.

Radha says she can never think bad of the Trivedi family and points at Damini but Kadambari states she won't hear anything against Damini.

Without any hesitation, Kadambari tells Radha to get out of the house while Tulsi gets upset at Kadambari's sudden change in behavior toward Radha.

However, as Kadambari leaves, she internally apologizes to Radha.

Radha announces to Damini that she won't leave Trivedi Bhavan until and unless she is assured that every family member is safe.

Meanwhile, Tulsi gets curious about why Kadambari is behaving so strangely under Damini's influence.

Threatening Damini that Mohan will be the one to interrogate Damini's motives next, Radha leaves from there.

Further, Radha goes to talk to Mohan who is running after an angry Gungun who refuses to eat food, however, she is asked to wait.

Later, Damini pushes Radha into a room and scolds her for not respecting Kadambari's feelings.

In a threatening tone, Radha states that if she gets to know Damini was involved with Hriday, she won't let Damini's marriage happen with Mohan.

An angry Damini then raises her hand at Radha who is not going to take Damini's nonsense anymore.

An irritated Damini then asks Radha who is she to Mohan while Radha says she has a lot of love for Mohan as he gave direction to Radha's life.

Damini glares at Radha as Radha swears on Banke Bihari's name to not let Damini marry Mohan while Damini grabs a knife to be aimed at Radha.

However, Tulsi makes Damini fall to the ground and closes the door with her powers.

She grabs Damini's neck through the air, making her choke.

Meanwhile, Gungun closes the door on Mohan's face angrily and he gets upset.

Radha comes to console him while he says his relationship with Gungun is there only due to Radha's presence in his life.

From her room, Gungun says that is why Mohan must stop Radha but he is stupid to not read the clues.

A worried Radha then tells Mohan she has something to share about Damini.

© Copyright tellybest.com, 2022, 2023. All Rights Reserved. Unauthorized use and/or duplication of any material from tellybest.com without written permission is strictly prohibited.
Cached Saved on: Monday 21st of November 2022 05:25:07 PMCached Disp on: Tuesday 29th of November 2022 10:28:37 AM