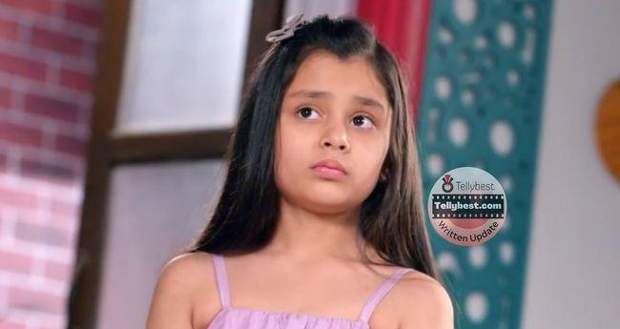 Today's Radha Mohan 6th January 2023 episode starts with Radha telling Mohan that there is someone in the room and hugs Mohan when he tries to control her saying there is no one in the room.

Damini gets furious to see Mohan hugging Radha and comes to set them apart and tells Mohan that Radha only needs an excuse to get close to Mohan.

Damini gets furious and tells him that even now he can think of Radha only so it will be better to decide whether he wants to marry her or not because she is ready to leave.

Kadambari warns Mohan to think very carefully as Gungun’s life is at stake.

Mohan tells Radha’s Dadi to take her with her and her condition will worsen the more she stays here.

Radha jams her feet on the floor refusing to leave.

Mohan comes forward and takes Radha’s hand in hers while Kadambari and Ketki look at her with pity.

Just then Radha sees the protective thread and concludes that Tulsi is being trapped by this thread and she does not want to hurt anyone in the house.

Radha intentionally breaks the protective thread while being dragged by Mohan which only Tulsi sees and becomes grateful to her.

Later, Mohan tells Radha’s Dadi to not scold Radha as Radha is not at fault and he will always be grateful to her for what she had done for the family.

Radha requests Mohan to believe her but Mohan tells her that there was no outcome to her suspicion as Damini was found innocent and now he has to marry Damini as promised.

He apologises to Radha for putting her in a position where her life turns miserable.

Mohan also tells Radha’s Dadi that he is just a call away if she needs anything and will always take responsibility for her.

Radha refuses to go but Mohan tells her that she will have to go and gets Banke Bihari for her to take with her.

Radha looks at Mohan thoughtfully and takes the idol from his hand while both recall their past moments.

Seeing Mohan and Radha stare into each other, Damini tells Mohan that the time for the wedding has come.

Mohan wipes his face and takes Radha’s hand and drops her out of the house and shuts the door on her making her departure final.

Kadambari apologises to Radha in her heart saying that she is helpless.

Meanwhile, Radha stands staring at the door for a long time while Mohan stands on the other side.

Later, Radha’s father goes to fetch the auto rickshaw while Radha looks at the protective thread and thinks to help her stop Mohan’s marriage.

Just then Tulsi appears and tells Radha that Damini had unknowingly brought them together and that today they will stop this marriage.