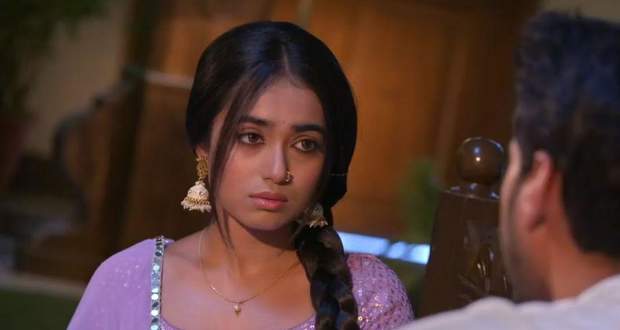 Today's Radha Mohan 6th June 2022 episode starts with Kaveri taking a picture of Damini and Mohan while Radha feels tears coming out of her eyes and wipes them away.

Radha goes to check on Gungun who gets angry at her for making her reveal the truth and making Mohan agree to marry Damini.

Radha tries to say that Damini will be the perfect mother for her but Gungun doesn't listen to her and kicks her out of the room.

At the same time, Shekher confronts Mohan for agreeing to the marriage and tells him that it should be his own wish and decision to marry Damini.

Ketaki gets annoyed at Gungun for telling the truth while Rahul says that it is Radha's fault and plans to do something about her.

Back in Mohan's room, he talks to the portrait and says that Gungun is growing up and will soon learn to accept Damini as her mother.

He takes Tulsi's name making her hope that he can see her which is shattered as Mohan leaves saying that Tulsi is dead.

Meanwhile, a priest is reading the birth charts of Damini and Mohan while Damini signals him to talk outside.

The priest lies that the birth charts match perfectly and leaves while Damini goes after him and gives him extra money asking what's the problem.

The priest tells her that Mohan is destined to have two marriages but she is not destined to become Mohan's wife which angers her.

Kaveri comes there and scolds the priest while Damini hits herself on the forehead with a rock and tells the priests that she will marry Mohan at any cost.

The priest gets scared and leaves while Kaveri takes Damini inside to wound her injury.

Meanwhile, Radha goes to the temple where she accidentally flings the Pooja thal and the kumkum falls on her forehead.

Back inside the house, Damini shouts out Tulsi's name and aggravates her by saying that she's going to marry her Mohan while the windows and doors start opening and closing making Kaveri scared.