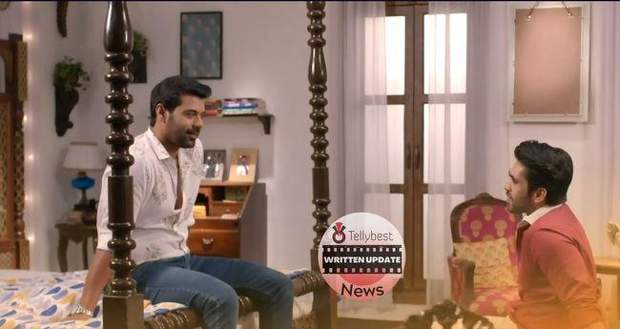 Today's Radha Mohan 6th September 2022 episode starts with the snake falling down from the top floor and lands near Gungun’s feet.

Everyone is shocked while Gungun shouts with fear.

Radha tells Gungun not to move a bit as the snake will attack if they suspect any danger.

Kadambari asks Mohan to save Gungun while Mohan looks at it in fear.

Seeing Gungun in danger, Tulsi tries to capture the snake at the risk of being found out but she is powerless in front of the snake.

Mohan tells Radha to distract Gungun as she is shivering with fear.

Radha starts to narrate a story when Damini interrupts her for being silly.

However, Mohan tells her that Radha is doing it to distract Gungun.

Meanwhile, Shekhar points toward the carpet and tells Mohan to use it to save Gungun.

Taking the hint, Mohan slowly goes towards the carpet and spread it over the snake.

Both Radha and Mohan grab Gungun and run to the sofa and land on it together.

Radha and Mohan are lost in each other’s eyes which angers Damini and Kaveri while Kadambari and Shekhar look at them with affection.

Kaveri could not stay silent and breaks the spell by scolding Radha for being too close to Mohan.

However, Kaveri changes her tune at Mohan’s stern voice and tells Mohan to call snake charmer so that he comes and captures the snake.

However, Radha tells them it is not wise to let snake charmer catch the snake because they exploit snakes by breaking their teeth.

Mohan tells Radha to not become an encyclopedia of snakes and tells the snake to not move from its place until the rescue team comes.

After a while, the rescue team comes to take the snake however, the snake has escaped.

The rescue team goes to search the house while Radha and Mohan are busy bantering each other.

Meanwhile, Kaveri berates Damini for bringing a snake to the house who is working to bring Radha and Mohan closer.

Later, the rescue team tells Mohan that they could not find the snake anywhere in the house so it must have sneaked outside.

Later, Mohan is playing the flute to help Gungun sleep and later he bends down to kiss Gungun’s forehead but Radha's hands reach there first and the kiss lands on Radha’s wrist.

Mohan apologises to Radha but she is lost in the sensation of that kiss and does not hear what Mohan has to say.