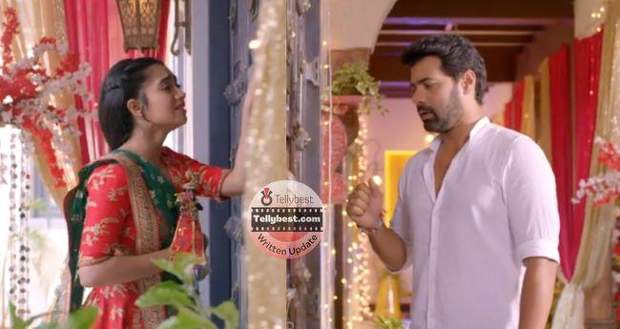 Today's Radha Mohan 8th January 2023 episode starts with Mohan thinking about Radha and her love confession as he slowly walks towards his room.

Meanwhile, Radha is also thinking about Mohan and the moments spend with him.

In his room, Mohan regrets sending Radha away while Kadambari comes to him and comforts him saying she understands it was not easy for him to send Radha away.

Mohan shares with Kadambari what all Radha has done for him and still, he sent Radha away.

In the meantime, Kadambari tells him that whatever he is doing, he is doing for Gungun and that is absolutely the right decision.

On being told to trust Banke Bihari, Mohan tells Kadambari that Banke Bihari takes away everyone who he loves.

Kadambari is in shock to hear that Mohan loves Radha but Mohan tells him that he is talking about Gungun.

Mohan tells Kadambari that he is worried about Gungun who is still angry with him and might go back to her old ways.

He gets up to go to Gungun's room to talk to her.

Kadambari cries about Mohan being in pain and wonders if this marriage will help Mohan or if it will increase his problems.

She decides to take measures so that nothing bad can happen to Mohan and Gungun.

Meanwhile, Tulsi stops Radha’s auto by puncturing its tyre and takes Radha away.

Later, Mohan comes to Gungun’s room and asks her to open the door.

However, Gungun tells him angrily that she does not want to talk to him and he should go away from there.

Mohan tells her that if she will not open the door then he will stand there and the time for the wedding will pass.

Gungun gets an idea and opens the door only to lock him inside so that he cannot attend his marriage.

Mohan asks Gungun if they cannot be enough for each other while Gungun tells him that it was Radha who has brought them together and who he had thrown out of the house.

Mohan blackmails Gungun using Radha’s name and tells her that if he will not marry Damini then she will have to go and live with her Nani and her uncles who had once kidnapped her.

Gungun tells him that it will be exactly like this house before Radha came here.

Mohan looks hurt and tells her that he needs her and at this time feels too scared to be alone.

Meanwhile, Damini is talking to Mohan's picture telling him that she is very happy that her love has won.

Just then Kadambari comes there questioning her if she really loves Mohan or not.

Quoting Radha, Kadambari tells her that she has seen herself, and the extent that she can go to get Mohan.

She also tells her that she has been tolerating all this because she believes she loves Mohan but if Mohan is discomforted in any way then she will not tolerate that.

She also tells Damini that she knows she can not give Gungun's mother’s love but she should not dare to become a danger to her.

Damini pretends to look hurt and tells Kadambari that she can never think of hurting Mohan or Gungun.

Hugging Kadambari, Damini wickedly thinks that after her marriage to Mohan then she will show her what her anger looks like.

On the other hand, Radha falls to the ground and becomes scared finding herself in a deserted place with owls hooting around her.

© Copyright tellybest.com, 2022, 2023. All Rights Reserved. Unauthorized use and/or duplication of any material from tellybest.com without written permission is strictly prohibited.
Cached Saved on: Wednesday 25th of January 2023 10:03:34 AMCached Disp on: Monday 6th of February 2023 05:28:41 AM