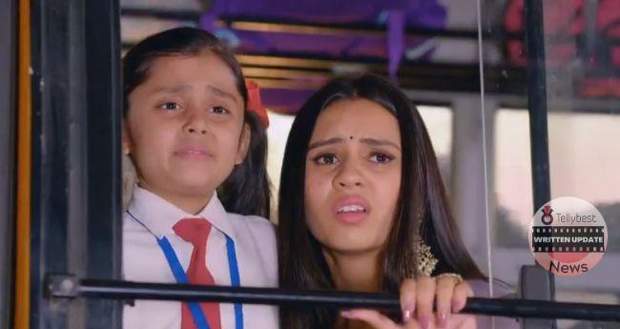 Today's Radha Mohan 9th November 2022 episode starts with Mohan telling Radha that he will not let anything happen to anyone.

Mohan puts the ramp on the bus and is walking slowly on it when he disbalances and falls while everyone shouts at him.

A while back, Mohan tells Radha to take the bus to the four-lane highway where they will start the rescue operation.

Tulsi, on the other hand, is watching the news on the TV and worries about Mohan and Kadambari and prays for her family’s safety.

Later, Mohan is stationed on the ramp while Kadambari drives the troller.

Gungun and Ketki are happy to see them while Radha asks about the driver.

Radha gets worried and tells Mohan that diesel is about to finish and he might get caught in the blast and tells them to go.

However, Mohan and Kadambari refuse to budge and promise to not let anything happen to anyone.

Gungun tells Mohan that she loves him and does not want anything to happen to him.

Mohan is gobsmacked to hear Gungun’s confession of love and feels delighted to hear them.

Mohan shouts to everyone that his daughter loves him and that he has been waiting to hear her say that for ages.

He also tells Gungun that now his life is fulfilled and he wouldn't mind dying today.

Radha gets offended and tells Mohan to not say words like these.

Kadambari gives Radha credit for bringing father and daughter together.

Meanwhile, Damini is panicking seeing Mohan's life at risk while Kaveri tells her to compose herself and not do anything that can send her to jail.

In the meantime, Mohan tells Kadambari that he is putting the ladder on the bus and she should keep the troller parallel to the bus.

Just then Mohan's feet slip he had a narrow escape with death.

In the present, Mohan rescues all the children one by one while the clocks continue to tick.

Children trust Mohan and follow his instruction while being afraid of falling.

During the rescue, Mohan continues to encourage children to not fear.

Later, Gungun insists on sending the driver and then they will go.

Seeing the driver worsening condition, Mohan picks up the driver and carries him outside.

© Copyright tellybest.com, 2022, 2023. All Rights Reserved. Unauthorized use and/or duplication of any material from tellybest.com without written permission is strictly prohibited.
Cached Saved on: Monday 21st of November 2022 04:08:03 AMCached Disp on: Thursday 1st of December 2022 03:11:29 AM