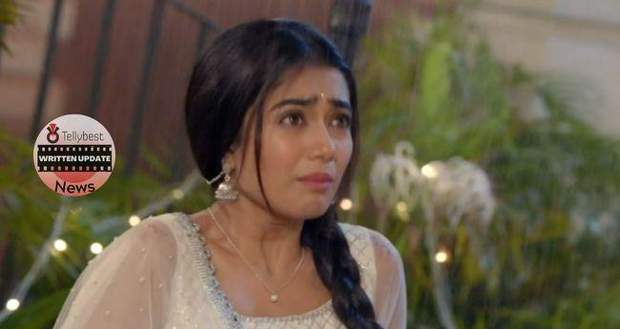 Today's Radha Mohan 9th September 2022 episode starts with Mohan asking the doctor whether Radha will be alright or not.

The doctor tells him that he has given her an anti-venom injection but until she wakes up it is difficult to say the gravity of her health so the night is crucial for Radha.

Damini gets angry and tells everyone that Radha’s tantrum is never-ending and creates new issues every day.

Mohan scolds Damini for saying that to Radha and tells her that Radha has saved his life.

Damini tells him that they would have saved him too by calling the doctor.

Mohan gets angry and asks her exactly when she would have saved him.

She was not there when the snake was in the room nor was he there when it bit him. What she is calling a tantrum actually saved his life at the risk of her own else they all would have been crying over his dead body.

Tulsi tells Kadambari that Mohan is saying all this because he loves her.

Later, Kadambari tells Mohan and Gungun to go and rest and she will sit with Radha.

However, both of them refuse to leave.

Damini gets angry and leaves the room followed by Kaveri.

In her room, Kaveri is shocked to hear that Radha is in love with Mohan and tells Damini that Mohan should not know about Radha’s love for him or else he will marry her immediately.

Later, Kadambari tells Damini that she does not need to do anything as Radha and Mohan are meant to be together.

She tells Damini that there is no point in a marriage where the other person does not want her in his life and that is why she has decided to wed Radha and Mohan.

Meanwhile, Mohan and Gungun ask Radha to wake up and promise her many things.

Gungun stops him from promising her full marks in class.

Mohan and Gungun begin to argue with each other and Radha wakes up amidst their banter.

Kaveri gets angry and tells Kadambari that she cannot wed Radha Mohan because Damini has waited for him her whole life and had been by his side always.

Kadambari reasons Kaveri and Damini that she will not be happy in a relationship where she is not valued and four lives will be destroyed.

Kaveri stops Damini from attacking Kadambari and tells her that she will make Mohan marry her and asks her to be patient.

Radha tells Mohan to promise her to never cry from now on.

Mohan tells Radha he does not cry while both Radha and Gungun tease him.

As Gungun goes to thank Banke Bihari Ji Kadambari comes in and thanks Radha for saving Mohan’s life.