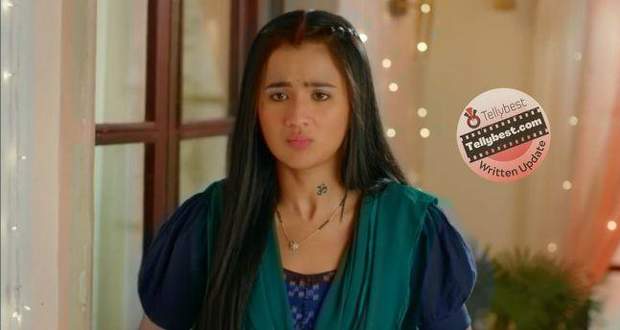 Today's Rajjo 10th December 2022 episode starts with Rajjo & Naman dancing with each other while Arjun's eyes are fixated on Rajjo.

Naman tells Rajjo that Urvashi is not trustable as she can only be good with Arjun.

Rajjo understands the jealousy inside Naman's heart and says she knew that he wanted to make her jealous.

Naman throws Rajjo's statement at her, saying she wanted to make Arjun jealous too but Rajjo is doubtful whether she matters to Khad Babu or not.

Out of the blue, Naman asks Rajjo to come with him to his room to get evidence against Urvashi.

A scared Rajjo pumps herself to do this for Arjun as Arjun excuses himself with a bathroom excuse to follow Rajjo.

Meanwhile, Chirag digs through Kalindi's cupboard as if trying to find something.

As Arjun passes by his room, he hears the shatter of a glass loudly and sees Chirag's panicked condition.

Chirag whimpers drinking alcohol & asks Arjun to get it for him.

Arjun asks him the reason for wanting it so suddenly and holds Chirag.

An angry Chirag asks Arjun why he cares when he is involved in his Urvashi drama as Rajjo was the only one there for him, otherwise, he would have been dead on the street.

Arjun gets emotional and Chirag keeps on saying that Arjun is doing a big mistake of leaving Rajjo for Urvashi & asks Arjun to leave him.

Meanwhile, Rajjo follows Naman as he chugs on alcohol.

Naman tells Rajjo that she was right about Urvashi not being trustable but then turns on Rajjo & asks her why she is questioning him so much out of all the relatives.

Rajjo stutters that it is not like that while Naman steps closer and corners Rajjo, almost on the verge to close the room.

However, Arjun enters the room and saves Rajjo, asking her what she was doing there.

Rajjo dumbly replies that she was talking about dancing with Naman and leaves to dress up Urvashi while Arjun tells Naman to stay away from Rajjo as he doesn't like anyone near her.

On the other hand, Manorama notices that Pushkar has installed a CCTV camera in the room to keep an eye on her.

She then hears some men talking downstairs and tries to hear what they are saying.

The group of men standing outside is the goons who try to call Urvashi as they have to hide the drugs in Thakur Nivas.

Meanwhile, Rajjo gets frustrated as Madhumalti calls her outside and she has to leave Urvashi alone inside the room.

Manorma then gets an idea to do Puja in the room by lighting incense sticks so the smoke clouds the camera's vision and she escapes.

As she falls on top of Arjun, the rose petals wet his kurta while Rajjo slowly blows on the petals on his face.

Both of them stare at each other for a long time and Rajjo internally asks herself why she cannot accept Khad Babu's marriage with Urvashi.

Meanwhile, Arjun internally asks himself why can't he move past his first meeting with Rajjo.

They both stand up after a while and Arjun scolds her for ruining his kurta.

Rajjo savagely replies that he is not the only one who got wet but he says it is his marriage day, not hers.

However, when they part ways, Rajjo's hand thread gets entwined with Arjun's watch and they both stop as if destiny is asking them to reconsider the future of their relationship.

© Copyright tellybest.com, 2022, 2023. All Rights Reserved. Unauthorized use and/or duplication of any material from tellybest.com without written permission is strictly prohibited.
Cached Saved on: Wednesday 25th of January 2023 07:42:24 PMCached Disp on: Thursday 9th of February 2023 04:02:01 AM