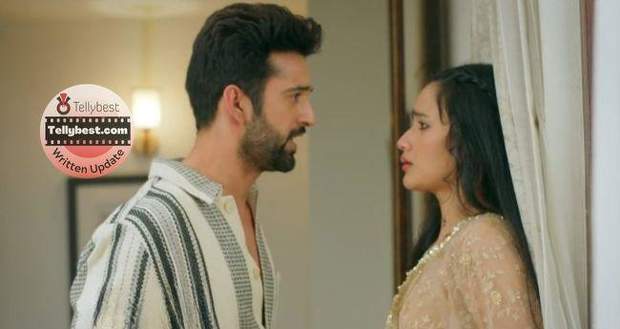 Today's Rajjo 10th January 2023 episode starts with Arjun ordering Rajjo to not move an inch when he goes to attend the call.

Arjun walks to the telephone and picks up the receiver.

Guru Maa speaks on the other side and talks to Arjun thinking she is Madhumalti.

She states that Arjun and Rajjo will become one today because of her cannabis powder and his Akal Mrityu Dosh will get transferred to Rajjo.

Arjun hears these words flabbergasted and falls on the floor shocked and recalls Madhumalti's desperation to keep him and Rajjo close.

Arjun is speechlessly sitting near the telephone while a storm starts to erupt.

Rajjo wakes up from the wind voices and goes to find Arjun worried for him.

However, Arjun is walking on deserted roads in strong winds.

He takes a pillar’s support, heartbroken by his mother’s betrayal as he recalls how she wanted her to take Rajjo to the farmhouse.

Arjun calls himself stupid as he didn’t think about Madhu’s action and cryingly states that he didn’t fraud Rajjo as he loved her unconditionally.

He screams in the air angry at her mother for doing this to him, Madhu chose Arjun’s life over Rajjo’s which breaks his heart.

Arjun blabbers that he will never live one second without Rajjo beside his side as she is his life, faith and love.

He blames Madhu as he was not able to confess his love to Rajjo.

Desperate Arjun states that now he will only look forward to his death as now his life has no meaning.

At the same time, a car is approaching Arjun and he looks at it actually hoping that it will end his hopeless life here.

However, the car changes its route and he lies on the road screaming with frustration.

In the temple, Rajjo is searching for Arjun and when she sees him standing in front of the idols she hugs him from behind tightly.

Arjun feels as if air has started to slow in his lungs and he holds her hand like sheer treasure.

Rajjo asks Arjun why he is standing here all alone but he orders her to go back home.

She insists on going back with him but he screams at her to go.

On the other hand, Manorama warns Pushkar that she will take revenge on him for attempting to hurt Rajjo.

Pushkar calls her superstitious and asks her to forget the past and live their present.

Later, Pushkar tries to kill Manorama by crushing her under his car but she picks up Mata’s Trishul and aims it at him.

Pushkar diverts the direction of his car, scared that Trishul will kill him.

In the Thakur mansion, Rajjo is sitting outside the house lifeless and the Thakur family reaches there.

Rajjo runs to her mother and hugs her tightly and Madhu asks where Arjun is.

She tells everyone Arjun left her alone and she didn’t do anything to make him angry.

Chirag consoles Rajjo that he will scold Arjun and even Madhu will do so.

At the same time, Madhu walks to the temple scared as she knows Arjun will never leave Rajjo alone.

In the temple, Madhu asks Arjun what happened and he states her son is dead and he hates her with all his wits.

© Copyright tellybest.com, 2022, 2023. All Rights Reserved. Unauthorized use and/or duplication of any material from tellybest.com without written permission is strictly prohibited.
Cached Saved on: Wednesday 25th of January 2023 10:43:17 AMCached Disp on: Wednesday 1st of February 2023 05:11:52 PM