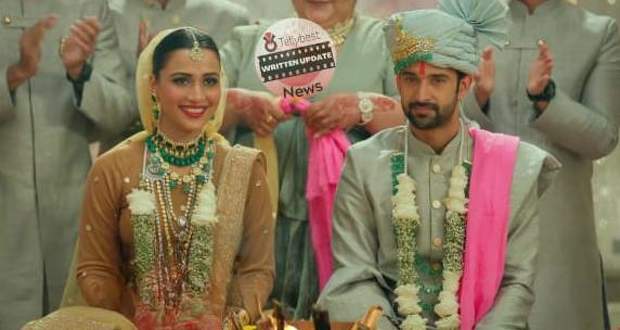 Today's Rajjo 10th October 2022 episode starts with Rajjo telling Arjun to not take Phera's with Urvashi while joining her hands to beg him.

The family looks on as Urvashi insults Rajjo and tells her that she will get a slap if she doesn't stop her drama anymore.

Before Arjun can talk to Rajjo, Madhu comes forward and starts berating Rajjo.

Rajjo requests to talk to Arjun and talks about the money and the fraud but Pushkar comes forward and stops her by insulting her even further and stating that Rajjo is money hungry.

Rajjo tells Arjun that she knows the truth about Urvashi when Madhu slaps her.

Pushkar drags Rajjo out of the house and throws her onto the ground while Madhu drags Arjun towards the Mandap amd forces him to complete the pheras while he keeps looking at Rajjo.

Rajjo thinks to use her last resort and runs inside the house telling Arjun that he cannot marry Urvashi since he's already married to her.

The Thakur family stands in shock while Madhu asks her how dare she even thinks of such a thing.

Rajjo tries to reply but Madhu calls her a liar and a schemer while asking her how many people's names is she wearing with the Mangalsutra.

Madhu keeps insulting Rajjo stating that she is just a money-hungry person who wants luxuries and other things.

Madhu falls to the ground while Chirag and Mukund help her up.

Arjun explains the situation in which he got married to Rajjo and how she had promised him that she will not talk about the marriage.

However, Urvashi starts insulting Rajjo saying that she is ungrateful for the help that Arjun gave her and is instead humiliating him even more.

Just then, Arjun comes forward and asks Rajjo why she backed out from her promise and humiliated him in front of everyone.

© Copyright tellybest.com, 2022, 2023. All Rights Reserved. Unauthorized use and/or duplication of any material from tellybest.com without written permission is strictly prohibited.
Cached Saved on: Monday 21st of November 2022 06:50:06 AMCached Disp on: Thursday 1st of December 2022 01:31:37 PM