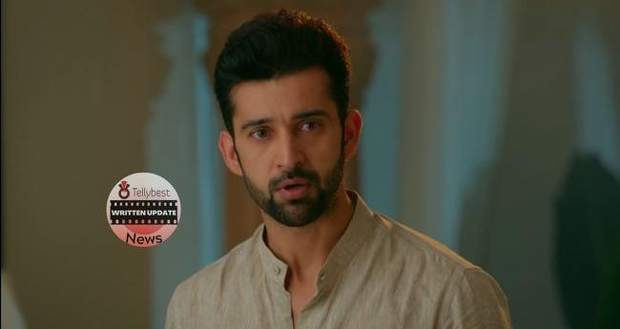 Today's Rajjo 10th September 2022 episode starts with Rajjo getting happy and thanks Pushkar for agreeing to help her find her mother.

Pushkar feels uneasy and leaves while he trips on his shoes.

However, Rajjo manages to hold his hand and saves him after which she and Arjun go back to the room.

Meanwhile, Pushkar looks at Kalindi over the balcony and thinks that his pride (Kalindi) and his evidence of debauchery (Rajjo) cannot stay under the same roof.

Later, Arjun is making space for Rajjo to hide inside the closet when they both suddenly get startled by hearing Urvashi's shout.

Elsewhere, Pushkar drinks as he insults his wife calling her inauspicious, and decides to ruin Manorama and Rajjo for trying to ruin his life.

Back at the Thakur mansion, Arjun hides Rajjo behind him while Urvashi flirts with him and tells him to come downstairs to celebrate Kalindi's birthday.

As soon as Urvashi leaves, Rajjo tells Arjun that she could hear his heartbeat which makes him flustered and unable to function properly.

However, she diffuses the tension that is building by joking that he's scared of Urvashi's proximity.

Later, as Arjun comes out of the shower properly dressed, he gets amused as he sees Rajjo dancing on the bed with her mother who is made out of pillows.

Seeing Arjun, Rajjo gives him a flower made out of foil wrappings and tells him to give it to Kalindi as it's her birthday.

Elsewhere, Pushkar thinks to find Manorama as soon as possible while Manorama is in his house hiding her face which is injured as per Kavita's orders.

Back at the Thakur house, everyone gives gifts to Kalindi, and Arjun's rose made out of foil wrapping gets praise while Kalindi keeps looking at Chirag.

Arjun sends Sai with a rose to Chirag in hopes of mending Chirag and Kalindi's relationship.

Chirag gives the rose to Kalindi but she drops it on the ground while telling Chirag that he changed after marriage and stopped loving her.

However, Chirag looks at the rose on the floor and tells her that they both should be blamed equally and states that he wouldn't have crushed the flower like she did.

As Rocky wishes Kalindi a happy birthday, he winks at her and holds her hand longer than necessary while she smiles at him.