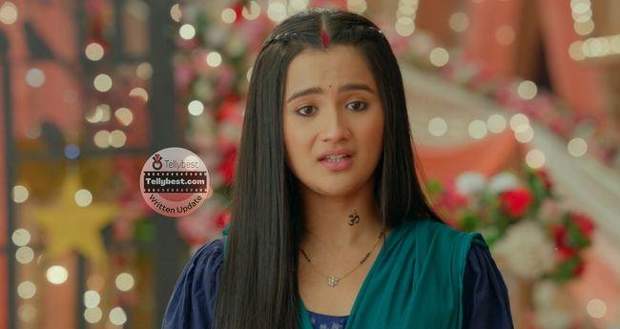 Today's Rajjo 11th December 2022 episode starts with Arjun and Rajjo standing with their backs faced to each other as Rajjo's thread gets entwined in his watch.

Without facing each other, they untie the knot and step away. Arjun feels that he has to move on from Rajjo & not be stuck as he is going to marry Urvashi.

At the same time, Rajjo feels that Urvashi's place is inside the jail, not in Arjun's heart or as his wife.

Meanwhile, the people from Loan Sharks enter Thakur Nivas, and Manorama who has heard their conversation bumps into Rajjo in the hall.

However, before she can reveal what she heard, Pushkar comes and asks Manorama to go back into her room as Madhumalti doesn't want her out during Arjun's wedding.

To give Rajjo a hint, Manorama says she wants to see the bride as she must be looking very beautiful.

However, Pushkar says no and Manorama then changes her statement, saying she will watch her from the window as seeing a bride from the East side is considered auspicious.

Pushkar takes a rambling Manorama away while Rajjo doubts whether Manorama was giving her a hint.

On the other hand, Urvashi tells the Loan Sharks that now, her father's debt must be cleared as she is going to help them hide the drugs worth crores.

Thankfully, Rajjo is there & records Urvashi from her phone. While Arjun gets ready, he sees Rajjo racing toward him in his room, holding her phone & hugging him tightly like a koala bear.

He keeps her close to his chest as they both fall on his bed with Rajjo underneath him while he is on top of her.

Rajjo softly tells Arjun that he shouldn't marry Urvashi and Arjun asks her to spell the reason for it.

She first asks him to shut up and then cuddles his face and reveals that she loves her.

Arjun gets emotional and confesses back when Chirag's voice snaps him out of his daydream and he realizes that this wasn't real.

Chirag tells Arjun he looks incomplete and adds the jewels to his pagdi and advises him to follow the rhythm of love.

Chirag states that he cannot advise Arjun on marriage but he can definitely comment on love as when one irrevocably falls in love, the life which was smooth earlier becomes complicated & tough.

Meanwhile, Rajjo decides to tell Urvashi's truth to Khad Babu but she falls on the ground after knocking her foot against a flower pot.

Urvashi sees Rajjo there and says she thinks like an octopus, which is why Rajjo's plan never come successful.

Rajjo savagely replies saying Urvashi is not an octopus but an insect who likes to stick to dirt and uses people.

She threatens Urvashi by sending her to jail but one of the men from Loan Sharks hit Rajjo on the head with a rod.

Manorama shrieks silently from the window and decides to climb down the pipe to help Rajjo as Urvashi asks the goons to lock Rajjo in the outhouse.

Later, Urvashi bumps into Kalindi who questions her about the broken sandal but Urvashi lies and goes inside her room, throwing the drug packets in the bag and thinking about where to hide them.

Meanwhile, Kalindi sees Chirag but he doesn't even look at her and goes on ignoring her.

On the other hand, Manorama reaches Rajjo in the outhouse while Rajjo slowly comes awake & asks Manorama if she remembers her.

Manorama cries seeing her condition & stops her from going to Arjun, and advises a fragile Rajjo to think from her mind this time.

Meanwhile, Madhumalti talks with Arjun and says today he is going to marry Urvashi and be her husband for the next seven lifetimes while he stays silent.

In the outhouse, Rajjo tells Manorama that she has to tell Khad Babu but Manorama strokes her cheek and says no matter if the poor state the truth, the rich never believe them.