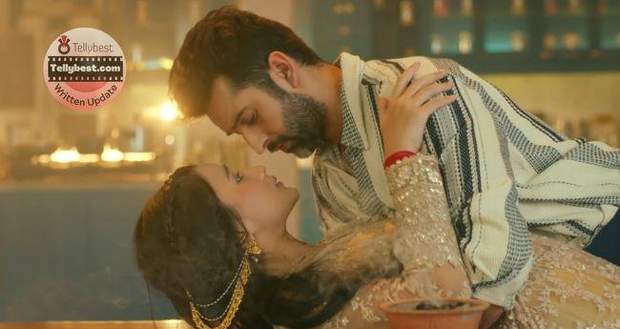 Today's Rajjo 11th January 2023 episode starts with Madhumalti scolding Arjun for talking to her so harshly.

Arjun berates Madhumalti for trying to transfer his death to Rajjo and asks for an explanation.

In the Thakur house, Rajjo is crying putting her head on Manorama’s shoulder.

Kalindi assures Rajjo that she will scold Arjun and ask for an explanation for his behaviour.

Chirag holds Rajjo’s shoulder in a brotherly way and requests her to calm down and stop crying.

Meanwhile, in the temple, Madhumalti explains herself and calls herself helpless and she says she will do anything to save him.

She states that he will understand her situation when he becomes a father and takes up the responsibility of an infant.

Madhu blames Rajjo’s fate for her actions of killing her and stubbornly states that Rajjo needs to die instead of Arjun.

Arjun glares at her mother and drags her in front of the idols and states that her heart is made of stone.

He promises her that he will never let Rajjo die before him and puts his hands on the lightened diya.

Madhu begs Arjun to not do this and falls to his feet but he shakes off her hand and walks away.

In Arjun’s room, Rajjo is sitting on the bed worried about Arjun’s weird behaviour.

At the same time, Arjun enters and she hugs him tightly and checks his face and body for injuries.

She asks him for an explanation about yesterday’s actions and says sorry if she has done anything to upset him.

Arjun doesn’t meet Rajjo’s eyes and asks her to control herself and assures her that he’s alright.

However, she doesn’t believe him and makes him sit on the bed while she sits near his feet.

Rajjo holds his hand and puts it on her cheek begging him to tell her why he is worried.

Arjun stands up hurt and says there’s no relationship between them and Rajjo traps him in the corner.

She questions him about the intimacy that they felt last night but he blames it on the intoxication.

Arjun wants Rajjo to forget about last night but she keeps insisting that she loves him in an indirect way.

He looks at the wall behind her but she grabs his face and hugs him tightly stating she is happy with him.

Arjun shuts his eyes and removes Rajjo from his embrace and states that she will cry tears of sadness if she lives with him.

Later, Arjun is beating a cardboard wall with elbows and punches and sits on the floor.

He states he doesn't believe his mother's superstitions but he is scared that Rajjo might lose her life.

Arjun cannot bear the idea of Rajjo being hurt and promises himself that he will make Rajjo independent.

On the other hand, Manorama holds Rajjo who is crying profusely, she informs Manorama that she confessed her feelings to Arjun and he rejected her.

Rajjo states she mistook Arjun’s care for love and now she is suffering the aftermath of it.

Manorama hugs Rajjo and apologizes to her for making her marry Arjun and thinking he loves her.

© Copyright tellybest.com, 2022, 2023. All Rights Reserved. Unauthorized use and/or duplication of any material from tellybest.com without written permission is strictly prohibited.
Cached Saved on: Wednesday 25th of January 2023 10:43:03 AMCached Disp on: Thursday 9th of February 2023 04:07:50 AM