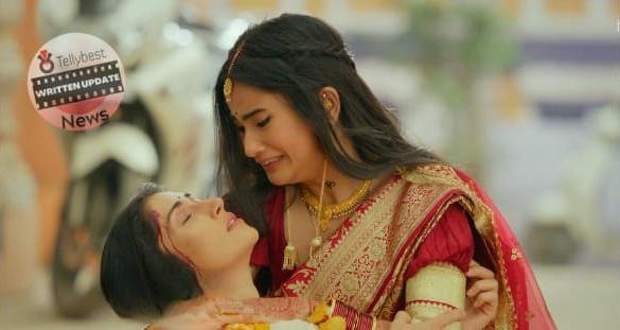 Today's Rajjo 11th October 2022 episode starts with Rajjo recalling the scene when she hid behind the earthen pot when she saw Urvashi standing with her father.

At the same time, Urvashi gets a call from Madhu and she lies about getting her makeup done.

Hearing Urvashi’s lies, she gets shocked while Urvashi turns to her father and accuses him of making them bankrupt with his gambling.

She accuses her father of calling her out on her wedding day but her father asks for her diamond necklace to pay off debts.

Angry Urvashi gives the jewellery to her father and tells him about her plan of stealing Arjun's wealth.

She plans to take Arjun to America after 3 months of marriage and demands that he takes up her parent's expenses.

However, if he does not accept her demand she will put a case of sexual harassment against him.

Meanwhile, Rajjo gets shocked to hear Urvashi’s vile plans against the Thakur family.

Urvashi says she will blackmail the Thakur family to transfer their whole wealth to her if they want to bail Arjun.

Meanwhile, Urrvashi’s mother has kept an artificial necklace ready for her.

Back to the present, Arjun takes her aside to talk for the last time.

He asks her the reason for breaking her promise as he is sure that she is not the kind of girl who will break her promise at any cost.

Meanwhile, Rajjo recalls talking to her Maai about revealing Urvashi’s truth to the Thakur family so she can save Arjun.

Manorama stops Rajjo and pleads with her daughter to not go as everyone will taunt her for being a gold digger.

However, Rajjo dashes towards Arjun’s house as she is sure that Arjun will pay heed to her words.

She calls Urvashi a gold digger and calls her a female Vicky but Arjun screams at her to shut up.

Arjun talks about Urvashi’s pride, respect and wealth and he says he was wrong for helping her.

He says Urvashi is better than her in every aspect while Rajjo recalls her mother's words about wealthy people never trusting poor people.

Later, Rajjo swears to save Arjun from Urvashi’s plan at any cost.

In the hall, Madhu asks Arjun what has he decided and he says Rajjo will go out of his life forever.

However, Chirag supports Rajjo and asks her the truth and she requests Khan Babu to check Urvashi’s necklace.

Fed up from all the drama, Arjun asks Urvashi for her necklace and scared Urvashi refuses.

However, Madhu stops Arjun but he sarcastically spouts out Rajjo’s words against Urvashi.

© Copyright tellybest.com, 2022, 2023. All Rights Reserved. Unauthorized use and/or duplication of any material from tellybest.com without written permission is strictly prohibited.
Cached Saved on: Monday 21st of November 2022 05:08:41 PMCached Disp on: Saturday 10th of December 2022 03:37:49 PM