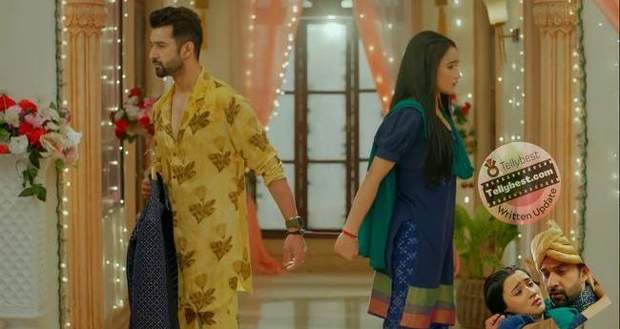 Manorama informs Rajjo that she has called the police and urges Rajjo to prove Urvashi the culprit only in front of the police.

Rajjo promises Manorama that she will bear the pain of Arjun being the groom of Urvashi until the police come.

On the other hand, Sia watches Chirag sneakily and when he sees her she requests him to never leave her ever.

Sia hugs Chirag while Kalindi cries seeing the bond between the father and daughter.

Chirag assures Sia and she kisses his cheek when he confesses his love for her.

Sia informs Chirag about the dress she bought for Rajjo and requests him to go with her to urge Rajjo to be her Chachi.

Later, Sia takes Rajjo while Manorama requests Chirag to not tell anyone about the earlier scene.

In the living room, Arjun sees Rajjo dressed beautifully and his heart skips a beat.

Rajjo raises her eyebrows and runs to him cutely with her hands folded behind her back.

She smiles brightly, admires her mangalsutra and throws marigold flowers in the air showering them on both her and Arjun.

Arjun laughs while Rajjo revolves around him cutely and compliments him by making a peacock sign.

However, his illusion breaks and he sees Rajjo standing gloomily while Chirag urges Arjun to not make the same mistake he did.

At the same time, Urvashi descends the stairs happily but gets shocked when she sees Rajjo standing in front of her.

Rajjo smirks at Urvashi and pretends to fix Urvashi's accessories while threatening her that she will not let her marry Arjun at any cost.

Madhumalti orders Rajjo to walk behind Urvashi and holds her dupatta so it doesn't touch the floor.

Urvashi walks to Arjun while he watches Rajjo, saddened by the fact that she will leave him today.

When Rajjo is about to enter the mandap, Madhumalti stops her and orders her to step back as she doesn't want her to dirty the auspicious area.

Meanwhile, Manorama watches the events crying hiding behind the pillar on the first floor.

Later, Arjun and Urvashi sit at the altar while Rajjo’s heartburn with the pain of seeing Arjun marrying Urvashi.

The ladies call Sia to do the gathbandhan of Arjun and Urvashi but she refuses to do so.

Urvashi urges Arjun to request Sia while Rajjo signals her to adhere to Arjun’s request.

Sia walks to the altar gloomily and requests god to listen to her prayers.

At the same time, the police arrive and order everyone to stop the marriage.

Arjun and Urvashi stand shocked when the police announce that they got anonymous information about drugs being hidden in the house.