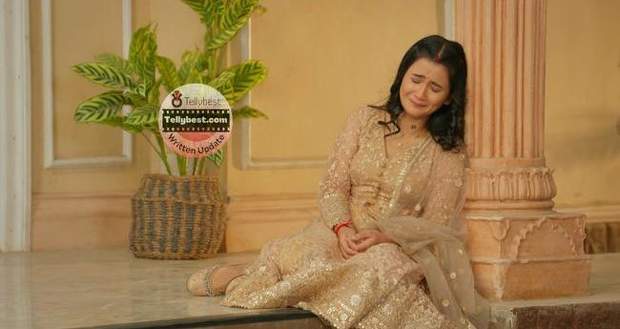 Today's Rajjo 12th January 2023 episode starts with Rajjo comparing Arjun to a moon that seems it's coming to you but is very far.

Manorama tells Rajjo that they are going back to Neeltal as Arjun is not accepting her as his wife.

She thinks that to save Rajjo from Pushkar they need to get away as soon as possible.

Rajjo gets lost in the memories that she spent with Arjun and agrees to her mother with a heavy heart but states that only Manorama will go back.

Meanwhile, Rajjo decides that she will fulfil Manorama’s dream of becoming a racer and she will write her own fate now.

She clenches her fist showing her determination and decides to follow the path she wants in which she will make every decision herself.

Rajjo states she has no explanation to give while Madhu begs her to not go.

Madhu assures her that she will get her anything she wants but she hurtfully says that she can never get what she wants and looks at Arjun.

Afterwards, Madhu cryingly calls Guru Maa and asks if she should get Arjun married to another girl but Guru Maa refuses and states to Madhu that if she lets Rajjo leave then be ready for Arjun’s death.

In Arjun’s room, Arjun is looking at his empty room with a heavy heart while Rajjo enters to pick up her bag.

Rajjo picks up the bag and asks Arjun if he married her because she saved him for Urvashi.

She calls herself stupid as she wasted her time making herself believe that he likes her.

Arjun looks here and there ashamed of meeting his eyes with her.

Rajjo states that she misunderstood the relationship between them and extends her hand.

Arjun shakes her hand hesitantly and suddenly Rajjo stumbles but he pulls her back to her feet.

A sad song plays in the background while Arjun thinks he is ready to give her up as he cannot be the reason for her death.

She walks ahead while Arjun begs her in his mind to turn around and look at him for one last time so he can remember this moment his whole life.

However, Rajjo doesn’t turn around while Arjun and her story resonate with the song “Hamari Adhuri Kahani”.

In the living room, Chirag warns Rajjo that he will slap her under the ear to make her lucid.

Kalindi supports Chirag while he grabs the strap of her bag and asks her to leave it or she will get hurt.

Rajjo begs them to let her leave but Arjun snatches the bag from Chirag and asks her to leave.

Chirag looks at them shocked and states he hates them as they have made him a fool.

Meanwhile, Rajjo walks to her Maai and walks to the gate with heavy steps.

At the same time, Madhumalti calls Rajjo’s name and falls on the stairs and rolls down the stair.

Rajjo runs inside while Arjun states that Madhu is lowering her self-esteem in front of him by doing the act of falling.

© Copyright tellybest.com, 2022, 2023. All Rights Reserved. Unauthorized use and/or duplication of any material from tellybest.com without written permission is strictly prohibited.
Cached Saved on: Wednesday 25th of January 2023 07:08:02 PMCached Disp on: Tuesday 31st of January 2023 06:10:55 PM