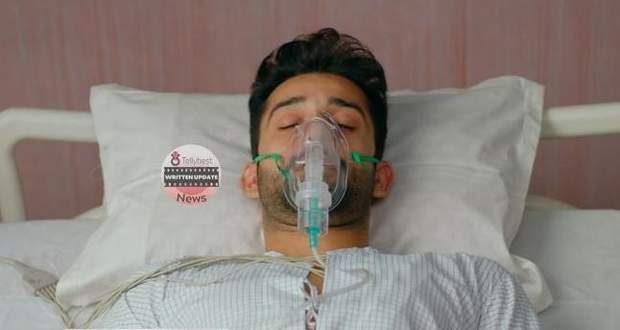 Today's Rajjo 12th November 2022 episode starts with Rajjo asking God why the people close to her always have to suffer like that.

Rajjo stands on one foot and starts praying to God for the well-being of Arjun while the doctor diagnoses a stable condition for Arjun.

After the doctor comes out and informs the family that Arjun is out of danger now, relieving everyone from the tension.

Everyone gets relaxed a bit while Pushkar suggests they should do something with Rajjo and her mother.

Kalindi gets a call from Rocky asking her to go on a drive with him which turns her furious as everyone is tense because of Arjun.

Kalindi tells Pushkar how Chirag must be blaming himself after remembering the past accident that happened because of his fault.

Chirag sits on a seat with a shaky voice as he remembers how he saw Arjun fighting for his life years ago because of his fault.

Rajjo comes and tries to comfort Chirag by saying that Arjun is in a stable condition now.

As Rajjo asks about the context Chirag is talking about, Chirag reveals that he and Arjun met in an accident years ago.

Chirag was driving the bike while Arjun was sitting behind him while returning from a party.

As Chirag was a bit drunk, they were bashed by a truck and ended up in the hospital where Arjun had to sacrifice everything for him.

Arjun donated one kidney to save Chirag’s life, leading him to lead his life with the support of medicines.

Hearing that, Rajjo breaks down into tears and blames herself for making Arjun go through such a physical hassle without knowing about his health.

As Rajjo decides to look after Arjun diligently, Kaka calls her and informs her that the doctors have decided to throw Manorama out of the hospital if the money is not deposited.

Rajjo finds herself in a dilemma as she has to run for her mother while having to look after Arjun at the same time.

Urvashi volunteers to stay the night at the hospital while others leave for home.

At night, Rajjo spots Urvashi sleeping outside and sneaks into Arjun’s room to check on him.

© Copyright tellybest.com, 2022, 2023. All Rights Reserved. Unauthorized use and/or duplication of any material from tellybest.com without written permission is strictly prohibited.
Cached Saved on: Monday 21st of November 2022 06:28:26 AMCached Disp on: Tuesday 29th of November 2022 10:20:22 AM