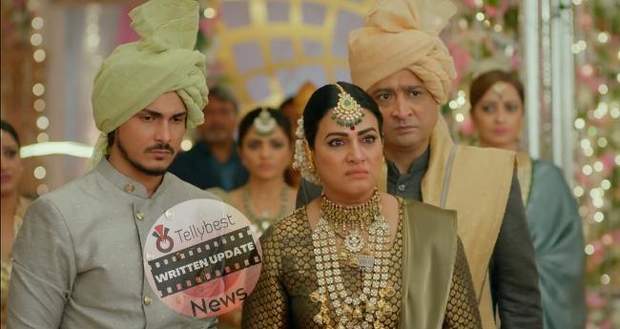 Afterwards, Urvashi removes her necklace reluctantly and gives it to Arjun while Madhu calls the jeweller.

Hearing the jeweller's words, Rajjo gets shocked as she saw Urvashi exchange the real necklace.

Arjun helps Urvashi wear her necklace and apologises for the humiliation.

Eager to kick Rajjo out of Thakur's house, Pushkar calls the police and Arjun orders Rajjo to get out.

At the bus stand, Manorama cries worrying for Rajjo and she blames herself for letting her daughter go into the den of lions.

After some time, the police arrive and arrest Rajjo but she recalls Gudiya sending her marriage video with Arjun.

She shows everyone the video and the whole family gets shocked while Arjun feels betrayed by Rajjo’s actions.

The police refuse to arrest Rajjo and walk away and the family breaks in two parts, one in Rajjo’s favour and the other in Arjun's.

Mukund and Karthik demand that Arjun and Rajjo live together and break Arjun’s marriage with Urvashi.

However, Madhu confronts everyone for making a joke of Arjun’s life by advising him to claim Rajjo as his wife.

Rajjo feels guilty for her actions but she has no other way to save Khan Babu.

Madhu accuses Rajjo of being a gold digger and declares that she will not be called Arjun’s wife even for a second.

Angry Madhu holds Rajjo's shoulders and asks her what she wants and begs her to leave his son.

She starts to fall at Rajjo’s feet to beg for her son’s freedom but Arjun hugs her mother refraining from kneeling in front of her.

Pushkar assures Madhu to calm down and assures her that he knows how to handle her.

Meanwhile, Urvashi runs to her room crying and Arjun asks Chirag to take care of Madhu and follows Urvashi.

Afterwards, Arjun requests Urvashi to open the door but Urvashi accuses Arjun of cheating on her as she thinks he also has feelings for Rajjo.

Urvashi intentionally instigates Arjun against Rajjo and he assures her that he will take revenge on Rajjo for doing this to him.

At the same time, Arjun hears Madhu’s loud cries and he runs to her mother’s side.

In Madhu’s room, Arjun sees his family worried and declares he has decided what to do with Rajjo.

© Copyright tellybest.com, 2022, 2023. All Rights Reserved. Unauthorized use and/or duplication of any material from tellybest.com without written permission is strictly prohibited.
Cached Saved on: Monday 21st of November 2022 05:02:35 PMCached Disp on: Friday 9th of December 2022 05:43:36 AM