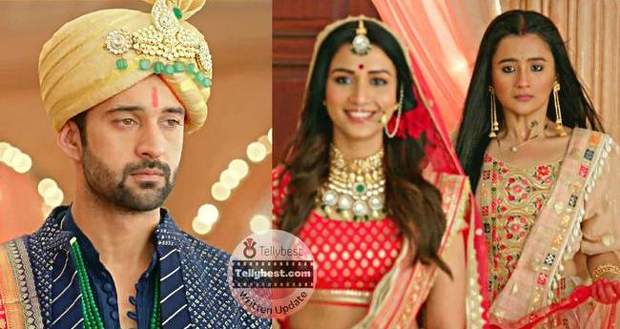 Today's Rajjo 13th December 2022 episode starts with the police announcing that they need to do a thorough checking of the Thakur mansion.

Pushkar, Karthik and Pratap confront the police and suddenly Rajjo claims that she was the one who called the police.

Rajjo tells Arjun that she has proof of Urvashi’s fraud while the family members accuse Rajjo of repeating the previous events.

Chirag tries to defend Rajjo but the family members shut him up by taunting Rajjo of being a fraud.

Later, Arjun orders Rajjo to speak and walk towards her while she interrupts him showing him the phone.

Rajjo exclaims that everything is the same as last time, she’s standing all alone with the evidence while everyone is against her.

Arjun taunts Rajjo for lying like last time but she begs him for one chance.

Rajjo looks at Arjun with pleading eyes while the family members insult her brutally.

Arjun gives in and walks towards the vase decorations and tears the beads from the thread and states that Rajjo has 60 seconds to prove her innocence.

Rajjo runs here and there gathering speakers while Arjun releases the beads one by one indicating the ticking time.

60 seconds pass and Rajjo is not able to present any proof against Urvashi.

Arjun and the family members berate Rajjo and she loses all her hope and stands embarrassed.

Meanwhile, Urvashi smirks as she has defeated Rajjo once again and has already destroyed all the evidence.

At the same time, the nurse drags Manorama away to her room while Rajjo accidentally projects the picture of her and Arjun’s marriage in the village.

Arjun gets furious as Rajjo has broken his trust in her once again and throws a burning candle to the bedsheet which is acting as a projector.

The screen burns with the bond between Arjun and Rajjo’s relationship.

Rajjo tries to defend herself but Arjun shuts her up saying he is fed up with her drama.

Arjun is walking away with teary eyes but Rajjo stops him claiming that Manorama remembers everything and accuses Urvashi of having the drugs.

The police order the need to search their house for drugs so Arjun allows them to do so.

At the same time, Madhumalti orders the Pandit to resume Arjun and Urvashi’s marriage.

Arjun and Urvashi sit in the mandap while the police search every room thoroughly.

Madhumalti ties their shawls (gathbandhan) into a knot while Rajjo prays for the police to find the drugs as soon as possible.

Meanwhile, Manorama is bound to a chair by ropes and the nurse keeps an eye on her.

When Manorama hears the police footsteps she screams from inside the door to check Urvashi’s room for drugs.

However, the nurse puts a hand on Manorama’s mouth and tells the police officer that Manorama’s mental health is not good.

The police walk to the living room and reveal they didn’t find any drugs shattering Rajjo's last hope of saving her marriage with Arjun.

Meanwhile, Arjun invites the police officer to his wedding feast and resumes his marriage with Urvashi.

Urvashi and Arjun take pheras while Rajjo watches them with teary eyes recalling the moments spent with Arjun.

Rajjo walks to the gate as she cannot watch Arjun burn their relationship and falls on the floor crying.