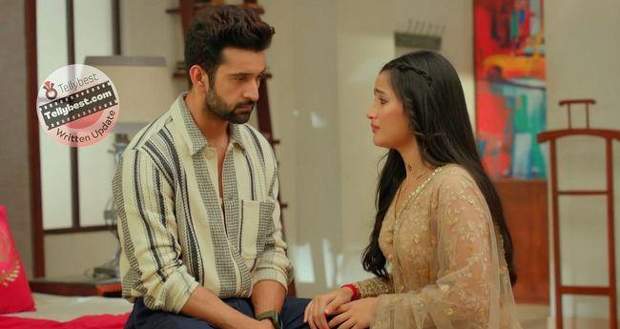 Today's Rajjo 13th January 2023 episode starts with Madhumalti asking the doctor to wrap her injury in a big bandage.

When the doctor goes out of the room Thakur family gathers around him asking about Madhu’s health.

The doctor lies that Madhu is at a critical stage of getting a heart attack if she keeps getting stressed.

Rajjo goes inside while Arjun berates Madhu in his mind for making the doctor learn what to say.

In the room, Madhu is chanting Rajjo’s name and when she sees Rajjo, she holds her hand delicately.

Rajjo apologizes to her that she got injured because of her.

Taking advantage of Rajjo’s sympathy, Madhu insists on her staying in the house and states she will let her do anything she wants.

Madhu apologises to Rajjo and allows her to go wherever she wants for her races.

She requests her to stay because of Arjun but she looks at the floor perplexed.

Outside the room, Chirag scolds Arjun for not doing anything but simply watching the family being broken into pieces.

Meanwhile, Madhu hugs Rajjo when she agrees to stay back and thinks about how can she let Arjun’s shield(Rajjo) go away without saving him.

Later, Arjun slams the door to Madhu’s room and enters the room while glaring at Madhu.

He orders her to stop her tricks which makes him more ashamed of her.

Madhu states she is doing this to save him and states that every wife needs to share her husband's difficulties.

Arjun asks her if she is ready to stoop so low to save him and Madhu agrees without blinking an eye.

On the other hand, Rajjo is walking anxiously to face Arjun as she thinks she is just an useless junk that he wants to get rid of.

Rajjo enters the room and Arjun informs her that he is going to set her clothes in another room.

Arjun tells her that when everyone knows that they have no future then why should they live in one room.

Angry at his words she snatches the clothes from him stating she doesn't need his help in anything.

Rajjo walks out of the room and Arjun slams the door shut, making her halt in her steps.

They cry at their fates as both love each other but can't remain together.

Later, Rajjo is lying in Manorama’s lap and states she is her world.

Rajjjo expresses her dream of taking care of her Maai and states she wants to be so successful that Rajjo's name is taken by everyone when a race is happening.

The next morning, Rajjo enters the sports academy and Pushkar enters with the coaches.

Pushkar assigns the coach to other players but not Rajjo so she inquires about her coach.

He informs her that she didn’t pay the fees of the academy so they cannot assign her a coach.

Rajjo asks him about the fees and gets shocked to hear the amount is 1 lakh.

At the same time, Manorama enters the frame wearing sportswear stating Rajjo has a coach.

Rajjo admires Manorama and Pushkar denies Manorama to coach her daughter as she is not a member of the sports academy.

Manorama reminds Pushkar that she was a member of the academy 20 years ago and was one of the finest players who brought the first gold medal.

On the other hand, Madhu is talking to Guru Maa anxiously as she is scared of Arjun messing up her plans.

Arjun snatches the phone from her hand and asks Guru Maa to let god decide when he needs to die.

He accuses her of homicide(murder) and states that he does not believe in her superstitions.

Arjun announces that he will never let them harm Rajjo at any cost.

© Copyright tellybest.com, 2022, 2023. All Rights Reserved. Unauthorized use and/or duplication of any material from tellybest.com without written permission is strictly prohibited.
Cached Saved on: Wednesday 25th of January 2023 09:27:41 AMCached Disp on: Thursday 9th of February 2023 04:06:53 AM