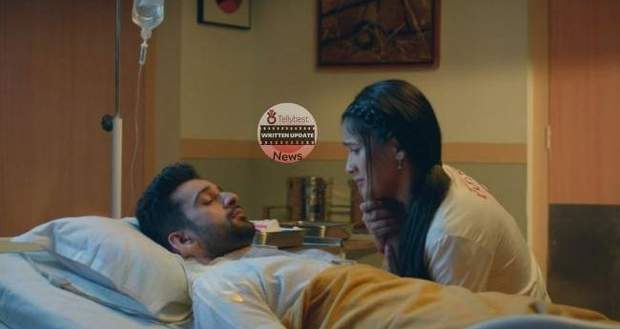 Rajjo rests her head on Arjun’s chest and asks him to wake up as he does not seem good while lying so quietly.

Rajjo tells Arjun that she is ready to listen to his demands and wishes and do anything he desires her to.

Holding onto Arjun’s hands and placing them on her cheek, she wishes for Arjun to wake up and scold her to his heart’s content.

Rajjo recalls how Arjun suddenly started to behave rudely toward her after a while and started calling her “Ghanti” instead of Rajjo.

Resting her head beside Arjun’s face, Rajjo says that Arjun does not know what he means to her.

Rajjo says that her day starts with the thought of Arjun and ends with him, she thinks about him when she gets angry, and feels bad when Arjun does not come to her.

Rajjo tells Arjun that her entire life revolves around him and she has grown used to him after meeting him.

Rajjo moves from Arjun’s lips to his forehead and plants a soft kiss there relying on all her love and care into that.

Suddenly, Arjun’s hand moves and he opens his eyes to see Rajjo in front of him.

Rajjo cries in joy on seeing Arjun awake and asks him to call her stupid, shut up, and all other kinds of curses.

However, Arjun again falls asleep due to the effect of the medicines while Rajjo gets the message from the coach about the race.

Rajjo asks Arjun to give her a sign conveying what he wants her to do as she is tied up from both sides.

Arjun’s hand falls on Rajjo’s phone and a picture of the marathon opens up, making Rajjo believe that Arjun also wants her to run.

Later at night, Urvashi wakes up and spots Rajjo patting Arjun while resting her head on his chest.

However, Urvashi gets distracted by her father’s call who tells her that the loan sharks are trying to kill them.

The next day, Rajjo leaves the hospital after assuring that Arjun is fine while Urvashi meets with the bank manager to get the money for Arjun’s fixed deposit.

Kalindi spots Urvashi with the manager and suspects something is wrong.

Meanwhile, Madhumalti stops Rajjo while she leaves for the race and curses her so that she cannot win the race.

© Copyright tellybest.com, 2022, 2023. All Rights Reserved. Unauthorized use and/or duplication of any material from tellybest.com without written permission is strictly prohibited.
Cached Saved on: Monday 21st of November 2022 08:15:42 AMCached Disp on: Thursday 1st of December 2022 12:38:42 PM