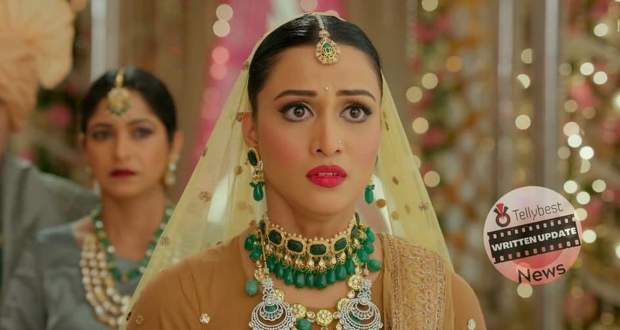 Today's Rajjo 13th October 2022 episode starts with Chirag and Pratap scolding Arjun for rescuing Rajjo as she has destroyed their reputation.

Arjun assures his father that he will throw this storm (Rajjo) out of their life.

On the other hand, Rajjo tells Manorama everything and says she drank the poison (Arjun’s hate) like Shiv Ji.

Meanwhile, Manorama scolds her for going overboard and tells her she has lost her Khan Babu.

Rajjo informs Manorama that she is going to live in Lucknow with Arjun for some months.

Maai tells her she is standing near the bus station and asks her to come to meet her for the last time.

On the other hand, Arjun recalls Madhu and Urvashi’s words and meets Rajjo while holding a cheque in his hands.

He orders Rajjo to call him “Sir”, he calls her a two-faced woman and offers her a blank cheque to complete her dreams.

Arjun insults her for acting like his fake wife and asks her to get lost after taking the cheque.

Hearing Arjun’s words, Rajjo cries while he slams the cheque on Rajjo’s hand and closes the house's door in her face.

Hurt by Arjun’s words, she dashes towards her mother’s location.

At the bus stop, Manorama is confronted by Pushkar who insults her for taking Rajjo to Thakur mansion.

He accuses Rajjo of being like her mother and tells Manorama to keep her away from Kalindi.

However, Manorama taunts Pushkar to let Rajjo live with Kalindi in the same house as she is also his daughter.

Pushkar gets furious and threatens Manorama to kill her as no one will save her.

Meanwhile, Arjun furiously takes off his clothes and punches the punching bag thinking about Rajjo's actions.

At the bus stop, Pushkar tells Manorama about hiring Vicky to sell Rajjo and she grabs his neck recalling her sports academy days.

She threatens Pushkar that she will not be afraid of him anymore and she is going to support Rajjo in revealing Urvashi and his truth.

He laughs telling her that no one will believe her.

Pushkar taunts Manorama saying Rajjo will have Arjun’s illegitimate child like her.

Furious Manorama pushes him down and shows him his real place.

In Arjun’s house, Arjun cries and blames Rajo for destroying his faith in helping people as her face will flash in front of his eyes.

Arjun decides to never forgive Rajjo and throws her scarf in the fire.

© Copyright tellybest.com, 2022, 2023. All Rights Reserved. Unauthorized use and/or duplication of any material from tellybest.com without written permission is strictly prohibited.
Cached Saved on: Monday 21st of November 2022 06:01:32 AMCached Disp on: Saturday 10th of December 2022 03:37:13 PM