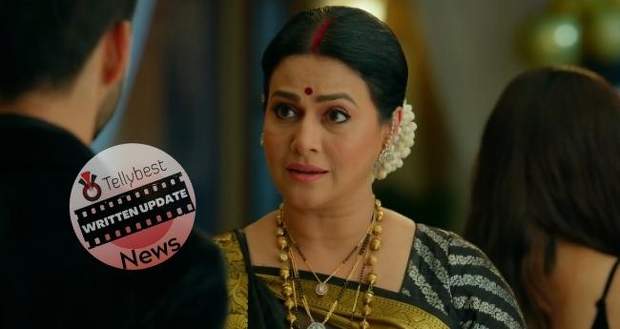 Today's Rajjo 13th September 2022 episode starts with Madhu shouting at Arjun and telling him that she is embarrassed by him.

Arjun tries to keep his tears at bay but fails as he tells everyone that he was keeping Rajjo in his room only till her mother is found.

Urvashi tells Arjun that she is not that understanding to accept this while he says that he has nothing to say other than sorry.

Arjun's uncle says that it is a matter of trust and says that he would have informed someone.

Just then, Pushkar and Dadaji come forward and state that they knew about Rajjo.

Pushkar tries to speak in support of Arjun but Madhu silences him and Dadaji and says that she respects them but they have crossed their boundaries.

Madhu tells them that she will not support them and states that only she has the right as she is Arjun's mother.

Madhu further humiliates Rajjo by asking her if she or her mother even knows who her father was or is while Arjun begs her to stop.

Afterward, Madhu turns to Pushkar and tells him that even though he comes after God for them, he still does not have the right to take decisions for Arjun.

Madhu turns to Rajjo next and humiliates her further by saying that she is trying to mooch off of the rich and compares her to a dog.

Arjun keeps begging Madhu to stop but she tells him to stay silent and not show off that he is being westernized.

Madhu says that it is final and that she wants Rajjo out of the house.

Arjun says that Rajjo's mother's name has already been shown on the rescue list and that it is only a matter of time before they get in contact with her mother.

Rajjo requests Madhu to not make Arjun cry as he was just trying to help her.

Shutting Rajjo, Madhu tells Rajjo that she is not doubting her son but girls like her and tells him to make her arrangements somewhere else and take Bharat with them.

Later, at the lady's hostel, Arjun and Rajjo are talking to the receptionist and ask them if they have any room while the hotel's warden talks to Pushkar on call and makes a deal with him.

The receptionist tells Arjun that there is no room but the warden interrupts them and says that she will make arrangements for Rajjo.

Arjun is sceptical yet Rajjo tells him to leave her there as she will manage.

Before leaving, Arjun tells the warden that he will keep an eye on the hostel as Rajjo is an outsider but not alone.

© Copyright tellybest.com, 2020, 2021. All Rights Reserved. Unauthorized use and/or duplication of any material from tellybest.com without written permission is strictly prohibited.
Cached Saved on: Saturday 1st of October 2022 10:50:06 PMCached Disp on: Thursday 6th of October 2022 04:12:35 PM