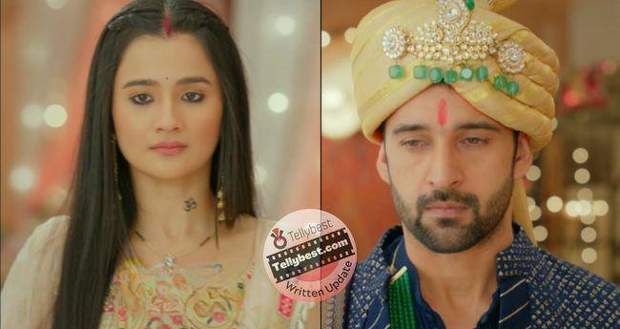 Today's Rajjo 14th December 2022 episode starts with Rajjo crying and praying to Bhole Nath while Manorama is doing the same in the room.

At the same time, Pandit Ji announces the bride to come ahead indicating the start of the 5th phera.

Arjun glares towards Rajjo and she watches them with tears in her eyes.

Suddenly, Rajjo realizes that Urvashi’s dupatta seems too heavy so she sprints towards the mandap.

Rajjo stands in front of Urvashi and grabs the gathbandhan and unties it harshly.

She tears the knot in Urvashi’s dupatta and the drug flies in the air like holy colours.

Drenched in drugs Urvashi looks like a witch while Rajjo claims that she successfully managed to stop her marriage twice.

Rajjo calls the police to check the drugs so the police officer walks to the mandap and confirms the presence of drugs by sniffing the white powder.

She assures Urvashi that she will go to her Sasural (Police Station) for sure even if she does not marry Arjun.

When Urvashi tries to shut Rajjo’s mouth she screams shut up and Urvashi falls down.

Rajjo proves Urvashi is the culprit and tells the whole family about the previous events.

Urvashi stands up and tries to play the victim card but Rajjo calls Naman to witness against Urvashi as she knows that the Thakur family will believe Naman over her.

Naman tells the truth to the family and reveals Urvashi’s and her parent's gold digger nature.

At the same time, the police officer informs that the drugs are of high quality and Rajjo exclaims Urvashi’s so-called Mama is behind this.

Meanwhile, Urvashi and her parents defend themselves by lying about the non-existent wealth and property.

At the same time, Chirag finds the video and throws the phone to Rajjo and she shows the video to Arjun.

Arjun plays the video to everyone while Urvashi cries and tries to stop Arjun.

Everyone gets shocked hearing the content of the video which contains Urvashi confessing how she poached Arjun for money.

After the video ends, Urvashi tries to defend herself but Arjun shuts her mouth saying she is a fraudster, not his Rajjo.

Hearing Arjun calling Rajjo his, Chirag smiles as his brother has finally come on the right track and realized Rajjo’s love.

Meanwhile, Arjun throws the turban on the floor and accuses Urvashi of betraying him.

When Urvashi tries to get close to Arjun, Madhu comes in between them and warns her to not take Arjun’s name from her black tongue.

Madhumalti disgustedly accuse Urvashi of playing with her as she always cared for her like a mother.

In Manorama’s room, Manorama removes the ropes bound around her.

Meanwhile, Arjun requests the police officers to take away Urvashi if not he will kill her.

Police arrest Urvashi but she tells Arjun that she was helpless and anyone would do the same if they were in her place.

However, Arjun says that Rajjo would have never done so and advises Urvashi to learn to love from Rajjo.

Arjun throws the engagement ring at Urvashi’s face and orders the police officer to take her away.