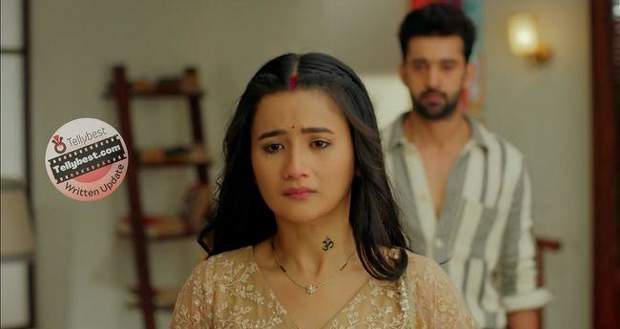 Today's Rajjo 14th January 2023 episode starts with Arjun angrily yelling at the Guru maa on the phone to stop her planning and plotting against Rajjo otherwise he will not spare her.

Madhumalti tries to take the phone away from Arjun’s hands but his grip remains firm. After he hangs up the call, Madhumalti starts scolding Arjun.

Arjun says that he knows she is acting and he knows that Madhumalti is not actually wounded but it is all part of her act to sabotage Rajjo.

Meanwhile, Pushkar is bashing Manorma that she can't become a coach at his academy as she has no experience, and is merely wearing a coach’s cap.

Rajjo steps in and says that a mother has an experience of a lifetime as she knows Rajjo’s strengths and weaknesses and no one can train Rajjo better for the race than her.

Rajjo also says that Manorma is not merely a woman wearing a cap but also a very good and experienced racer of her time.

Rajjo says that she will never ask Manorma why did she leave practicing her race because that is her choice.

This brings back some bitter memories of Manorma when Pushkar pushed her out of the academy when he found out that she was pregnant with his child.

Manorma tells Pushkar that his approval is unnecessary for her to become Rajjo's coach, making Pushkar furious.

Outside the Thakur house, Jhilmil meets with the Guru ma and says that she can't let her in.

Guru ma says that she has done so much for the family as this is how she gets paid back.

Chirag spots Guru maa and Jhilmil and wonders to himself what is going on with them.

Guru maa then hands over a small bottle infused with black magic and asks Jhilmil to hand it over to Madhumalti.

Meanwhile, Rajjo tells Manorma that she never thought that this day will come when Manorma will coach her as she was always against her race.

Manorma apologizes to Rajjo for being a terrible mother to her before and hugs Rajjo.

Manorma says that she was very scared that what happened to her, might happen to Rajjo as well and therefore she did not want her to race, however, she has now overcome all her fears and will support Rajjo, no matter what.

Arjun watches them from a distance and wonders to himself that he must find a way to save Rajjo as he knows that Madhumalti will try to hurt her again.

Rajjo spots Arjun who tries to act aloof on seeing her, however, Rajjo goes to him and says that she doesn't even know if he's lying or not about being at the academy for meeting with Pushkar.

Rajjo says that he didn't even tell her why is he maintaining distance from her, even though it hurts her a lot.

Rajjo then says that when she was starting to get closer to him and understand him, she thought that both of them had mutual feelings for each other, however, she was wrong.

She then says that she knows why he came here, he wanted to check on her but now she does not need anyone’s help and can survive alone.

At last, Rajjo says that Arjun is very pure-hearted and should not change for her sake.

Back at the Thakur house, Jhilmil brings the tiny bottle of Guru maa to Madhumalti.

© Copyright tellybest.com, 2022, 2023. All Rights Reserved. Unauthorized use and/or duplication of any material from tellybest.com without written permission is strictly prohibited.
Cached Saved on: Wednesday 25th of January 2023 09:10:51 AMCached Disp on: Monday 6th of February 2023 04:25:06 AM