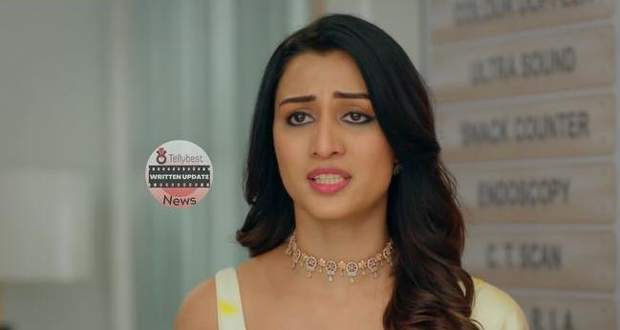 Today's Rajjo 14th November 2022 episode starts with Madhumalti and Jhilmil leaving the house after cursing Rajjo and her mother.

Chirag asks Rajjo not to pay attention to their words as he knows she is not a bad person.

As Chirag motivates Rajjo to run her best in the Diwali race, Rajjo leaves the house with a refreshed mind.

However, Kalindi’s call interrupts Rajjo when she informs Rajjo about Urvashi meeting with their bank manager and planning to retrieve the money from his fixed deposit.

Rajjo gets shocked to know the news and stands at a crossroads about either choosing to go to the race or the hospital to save Arjun.

Meanwhile, Urvashi comes to Arjun while he seems to be hallucinating due to his meds.

Arjun sees Urvashi as Rajjo and says that he sees her everywhere, even in his sleep, which makes Urvashi furious.

Urvashi decides to talk about it later and imprints Arjun’s thumb impression on the paper.

However, Rajjo comes there and tells Urvashi that she will not let her loot Arjun in front of her eyes.

Rajjo asks Urvashi to hand over the paper but Urvashi refuses to do so and asks Rajjo to get it herself if she has the guts.

Rajjo and Urvashi clash against each other to take the papers with Rajjo succeeding in taking them from Urvashi.

Rajjo asks Arjun to rest peacefully and leaves with the paper.

Urvashi calls Kalindi and tells her that she has turned to her enemy from now on as she knows that Kalindi is the one who told Rajjo about her.

Kalindi gets nervous on hearing Urvashi’s warning about exposing her affair with Rocky to Chirag.

Later, Rajjo overhears the doctor telling Madhumalti and others that something has tampered with the medicine.

Madhumalti assures them that no one has the guts to open the ice box as they are aware of the importance of the medicine.

Rajjo remembers finding the ice box outside Kalindi’s room and spotting meted ice inside which makes her suspicious.

Confronting Kalindi about the matter, Rajjo tells her that she will find out the person who opened Arjun’s ice box.

Meanwhile, Madhumalti finds a strand of hair on Arjun’s shirt and recognizes it as Rajjo’s which turns her furious.

© Copyright tellybest.com, 2022, 2023. All Rights Reserved. Unauthorized use and/or duplication of any material from tellybest.com without written permission is strictly prohibited.
Cached Saved on: Monday 21st of November 2022 05:04:12 AMCached Disp on: Wednesday 7th of December 2022 03:56:26 PM