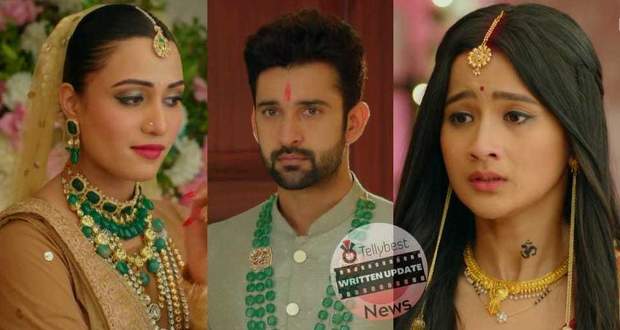 Today's Rajjo 14th October 2022 episode starts with Manorama threatening Pushkar that Rajjo will not repeat her history while she will reveal his truth to everyone.

Manorama grabs Pushkar’s chin and threatens him saying his and Urvashi’s plan is going to be revealed to the whole Thakur family.

She declares that she will ruin his so-called reputation into tatters and walks away while Pushkar gets scared.

Afterwards, Rajjo sees Manorama walking in the road and calls her name but Pushkar’s car crashes into her.

Manorama's body flies, hitting her head on a big boulder and Rajjo runs towards her and gathers her bloody body in her arms.

Seeing Manorama’s state, Rajjo calls for help desperately and begs her mother to open her eyes.

Manorama opens her eyes and tells her to never accept defeat and always fight for her right.

In Arjun’s bathroom, Arjun sits on the corner of the bathtub with red eyes and Chirag sits opposite him.

Seeing Arjun’s bloody knuckles, he cleans them with a towel while questioning his suspicions of Rajjo being a fake fraudster.

Chirag defends Rajjo as she helped him defeat Vicky and never cooked any rumours when she lived in Arjun’s room.

However, Arjun's hate for Rajjo has crossed its boundary and he says she has broken his self-esteem.

Arjun exclaims that he gets haunted by her accusations against Urvashi.

Chirag also agrees with him as they know Urvashi’s family for a long time.

Later, Arjun tells Chirag that he will give Rajjo the money and if she runs away with it making their marriage null then he will marry Urvashi.

In the hospital, the doctor kicks out Rajjo from Manorama's room while she requests him to save her Maai.

In Urvashi’s room, Urvashi’s parents blame Urvashi and berate Arjun for being a Philanthropist (a person who helps needy people).

Frustrated from their banter, Urvashi orders her parents to pack their back as they are leaving Thakur mansion immediately.

In the hospital, the police ask Rajjo about the accident details and urge her to recall all the details.

Suddenly she remembers a big tattoo on the car and informs the police and cries as she does not know anything else.

In Thakur's house, Urvashi and her parents descend the stairs with their bags and the Thakur family gathers around them.

Urvashi acts like a fragile bride and acts to leave while they beg her to stop.

Arjun joins his hands to stop Urvashi while Madhu says she is her daughter now.

In the hospital, Rajjo gets shocked when the doctor demands 3.5 lakh for Manorama’s treatment.

Nangu Kaka tells Rajjo to take whatever help she can get for Manorama.

However, she watches her mother helplessly from the glass door.