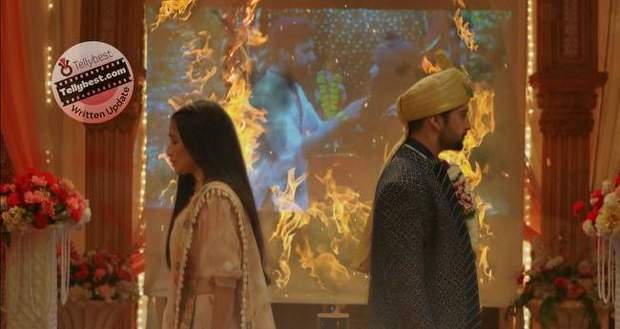 Today's Rajjo 15th December 2022 episode starts with Pushkar getting scared as he knows that the Thakur family will now see Rajjo and Manorama as a saviour.

Pushkar decides to do something and goes from there.

Meanwhile, Arjun turns around to talk to Rajjo but she walks to the store room ignoring him.

Rajjo enters the store room and says it’s time to take her leave with tears in her eyes.

In the corridor, Arjun slams the decoration on the floor in frustration from the guilt of his actions.

The cloth around the decoration catches fire and Arjun uses his hand to extinguish the fire to save Rajjo’s payal that fell from his hand.

Meanwhile, the flashback plays in both Arjun and Rajjo’s minds while Rajjo dips herself in the water to wash off the sindoor of Arjun’s name.

A sad melody is playing in the background which resonates with both their thoughts.

Arjun asks himself what will happen now while Rajjo says in the store room that the events will happen according to his will.

In Madhumalti’s room, Madhumalti is rocking on the rocking chair violently due to sadness.

She cries saying whatever happened with her son was wrong.

Meanwhile, Chirag advises Arjun to not let any rock unturned to stop Rajjo from leaving.

Later, in the living room, Rajjo thanks Arjun for saving her back in Neeltaal and taking her to Lucknow.

She thanks him for helping her save her Maai and fighting with his family to treat her injury.

Madhu stands on the staircase with eyes full of tears while Rajjo announces her decision to leave.

Rajjo assures Arjun that no one will call him Khad Babu anymore and he will not need to say shut up all day long.

Arjun rolls his eyes at Rajjo’s words and takes a deep breath of anxiety.

In Manorama’s room, when Manorama does not open the door Pushkar uses a screwdriver and puts it in the creak of the door.

In the living room, Rajjo proves herself as an innocent human being and states she has removed every sign of her marriage such as bangles, sindoor and mangalsutra.

She tells him that she will make her Maai proud by making a career and gives him the mangalsutra.

Rajjo reminds him that she promised him that the day she proves herself and Manorama innocent she will leave the house.

She states that she thinks now everyone believes in her honest nature and is faithful to her relations and Madhumalti grabs the flowers on the railing tightly.

Rajjo tells him she will work hard to become a national-level athlete like Manorama.

Meanwhile, Pushkar walks to the railing when he hears Sia and Chirag requesting Rajjo to stay.

Chirag and Sia emotionally blackmail Rajjo saying she promised them not to go.

However, Rajjo states that she can never forget them as they were the ones who supported her when no one did.

Rajjo requests Chirag to not make her beg as she doesn’t want to bow to anyone now.

She wants to become successful so no one calls her Ghanti and Lice but pats her back with pride.

Kalindi hugs Rajjo and thanks her for everything and Rajjo requests her to take care of Chirag and Sia.

When Rajjo starts to go, Madhu's voice booms in the hall stating Rajjo will not go anywhere.

© Copyright tellybest.com, 2022, 2023. All Rights Reserved. Unauthorized use and/or duplication of any material from tellybest.com without written permission is strictly prohibited.
Cached Saved on: Wednesday 25th of January 2023 10:02:36 AMCached Disp on: Thursday 9th of February 2023 06:08:26 AM