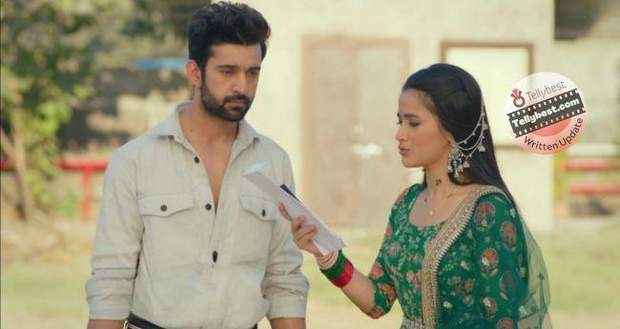 Today's Rajjo 15th January 2023 episode starts with Pushkar overhearing 2 coaches talking about Manorma's truth about how she got pregnant by someone in the academy without being married but they don't know the man involved in it.

Pushkar thinks to himself that before his truth comes out he has to get rid of Rajjo and Manorma.

Pushkar blackmails a health inspector of the academy to give Rajjo an injection of steroids rather than vitamins.

Meanwhile,  Rajjo goes to Madhumalti to ask her about her health. Madhumalti tells Rajjo that today is Makarsankranti and for that, she has ordered new clothes and jewelry for Rajjo.

Before Rajjo could say anything to Madhumalti, Madhumalti starts acting like she's in pain.

Being manipulated by Madhumalti, Rajjo gets dressed while Madhumalti applied the black magic-infused perfume on Rajjo after which Madhumalti then asks Rajjo to keep a bottle of oil in Arjun's bathroom.

Rajjo goes into Arjun's bathroom and is about to fall down when Arjun holds her making her drape come all over her face.

Meanwhile, Jhilmil closes their bathroom door from the outside while Arjun removes the drape from Rajjo's face but finds Kajal all over her face and starts laughing.

Rajjo angrily asks him that if he finds her so ugly then why did he come to the academy to see her.

Arjun stops laughing and comes closer to Rajjo, he takes a towel to wipe the extra kajal off her face.

Both of them look at each other deeply while Arjun whispers that Rajjo is the purest human being alive and starts getting even closer.

They both close their eyes lost in the moment but right before they are about to kiss, Rajjo gets unconscious and starts falling down.

Arjun holds her and breaks the bathroom glass because the door is locked and to get out of there, he calls Chirag to call the doctor while Manorma comes too and gets very worried.

Madhumalti and Jhilmil pretend to act like they are also concerned while Manorma says that she feels like someone is after Rajjo's life because again and again Rajjo's life gets threatened.

Manorma suspects Pushkar behind Rajjo's condition which offends Kalindi, however, they find out that Rajjo was perfectly fine before she went to Madhumalti's room.

The doctor arrives and checks Rajjo. He gives her an injection and says that she got an allergic shock from something she's allergic to and if they had gotten a little late, she would have died.

Manorma loses control and starts screaming when Arjun moves toward Madhumalti and asks what had she given Rajjo to eat.