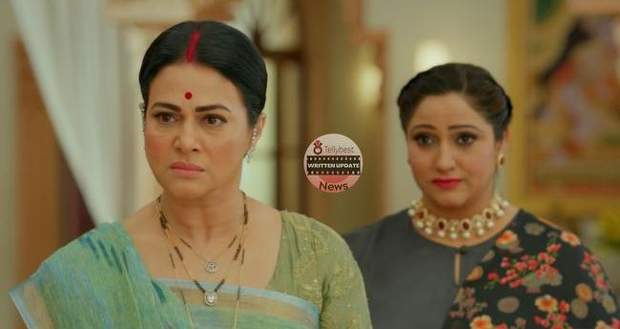 Today's Rajjo 15th November 2022 episode starts with Kalindi getting distressed as she notices that Rajjo is suspecting her of tampering with Arjun’s medicines.

Kalindi shifts her focus toward Urvashi and decides to find a permanent solution for her after discussing the matter with Rocky.

While Urvashi drinks coffee at the hospital, a loan shark appears there and warns her about the deadline for giving him the money.

Urvashi tells the loan shark that she could not get the 30 lacs as promised but she will soon return their money as she knows many influential people.

To convince the loan shark, Urvashi tells him that she is familiar with Pushkar Choudhary which Pushkar overhears while passing by.

Pushkar decides to do something about Urvashi so that she does not utter his name from her mouth.

Meanwhile, Rajjo prays to God for Arjun’s recovery so that she can breathe in peace.

Rajjo imagines Arjun appearing in front of her in perfect condition and scolding her but soon realizes it to be a dream.

The coach calls Rajjo and asks her why she did not come to the race when she had an opportunity to showcase her talent.

Rajjo tells the coach that she could not leave the person who saved her life and made her reunite with her mother.

The coach offers a new job to Rajjo teaching children's games and him as his assistant, which she gladly accepts.

Just then, Rajjo notices Urvashi going out while talking on her phone and decides to follow her.

Urvashi calls her parents greedy as they always loan money from moneylenders and get her in trouble.

Rajjo walks behind Urvashi but gets blocked by an ambulance while some thugs forcefully put Urvashi in their car and flee.

After the ambulance leaves, Rajjo sees no sign of Urvashi and wonders if she disappeared in thin air.

Later, Urvashi’s parents come into Arjun’s room and inform him and others that Urvashi has been kidnapped.

They show the family members a video of Urvashi asking for help and saying that the thugs will kill her if they do not get 1 crore.

Urvashi’s parents reveal that Rajjo saw Urvashi for the last time before she disappeared.

Arjun asks Rajjo if she is hiding anything to which Rajjo answers with a no.

As the police ask Rajjo why she was following Urvashi, Rajjo goes silent as she cannot reveal Urvashi’s schemes.

© Copyright tellybest.com, 2022, 2023. All Rights Reserved. Unauthorized use and/or duplication of any material from tellybest.com without written permission is strictly prohibited.
Cached Saved on: Monday 21st of November 2022 01:09:15 AMCached Disp on: Thursday 1st of December 2022 02:31:18 AM