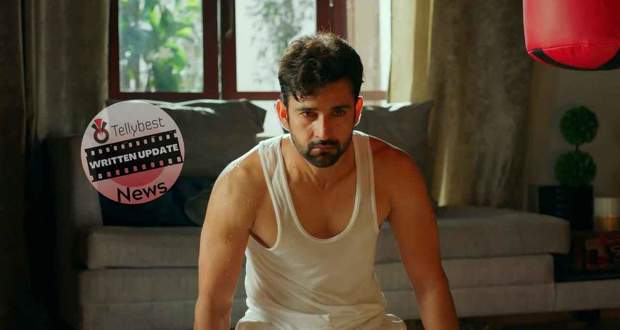 Today's Rajjo 15th October 2022 episode starts with a nurse crashing into Rajjo turning her face to the other side.

Suddenly Rajjo sees her dupatta in the dustbin which the janitor is wheeling out.

She picks up the dupatta and unfolds the cheque happily and thanks Arjun for helping her unknowingly.

In Urvashi’s room, Arjun gets a message about a cash withdrawal from his bank account and he shows the message to Urvashi.

He assures Urvashi that everything will be okay as Rajjo is gone and he informs her about the cheque he gave her.

Urvashi taunts Arjun for believing in a gold digger like Rajjo and he apologises to her.

Later, Arjun is praying while Rajjo enters the house and crashes with him.

Meanwhile, shocked Arjun confronts Rajjo for coming back after encashing her cheque.

He accuses Rajjo of being a fraudster and tells her to get out while she tries to tell him about Manorama’s condition.

Rajjo tries to tell Arjun that she used his money for her Maai’s surgery but he is not interested in knowing anything about her or Manorama.

Just then, Urvashi enters the area and smirks at Rajjo while he insults her for accusing his future wife (Urvashi) as a fraudster.

Arjun declares that everything belongs to Urvashi including him and Thakur's mansion is also hers.

When Arjun tries to kick out Rajjo she stops him and declares that she is his wife and reminds him about Karthik's words.

She informs Arjun that she will reside in his house as she is Rajjo Singh Thakur.

Closing the main door she looks into Arjun’s furious eyes while he asks why she is not leaving even after taking the money.

However, she threatens Arjun saying she will call the media, NGO and police and ruin Thakur’s reputation and will sue his family for harassment.

Arjun gets angry at Rajjo for changing colours like a chameleon while she walks to the storeroom.

In the storeroom, Rajjo cries about her rude behaviour and hates herself but she has no choice.

In the evening, Mukund accuses Arjun of creating a Mahabharat in the house while Chirag defends him.

Chirag and Mukund start to fight while the family separates them and scolds them.

Meanwhile, Rajjo watches from afar and Urvashi stands beside her and praises her bravery.

She advises Rajjo to play her cards wisely as she will get nothing by helping Arjun.

Rajjo threatens Urvashi of wanting to play a game in which a person grabs another's ear and turns their ear until they scream.

Urvashi calls Rajjo a leech while Rajjo mockingly says she wants to suck her blood.

© Copyright tellybest.com, 2022, 2023. All Rights Reserved. Unauthorized use and/or duplication of any material from tellybest.com without written permission is strictly prohibited.
Cached Saved on: Monday 21st of November 2022 01:55:38 AMCached Disp on: Thursday 1st of December 2022 03:22:51 AM