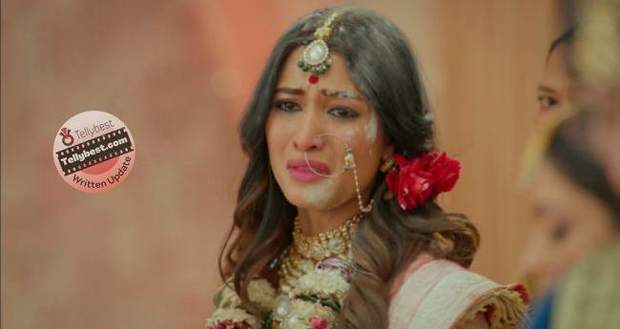 Today's Rajjo 16th December 2022 episode starts with Rajjo forgiving the family for their previous actions in which they humiliated her.

Rajjo gives life lessons to the Thakur family and states no one knows when bad times come.

Later, she requests Chirag to bring Manorama from the room as the room is locked.

However, Madhumalti’s voice booms in the living room stating that Rajjo will not go anywhere.

Madhumalti walks to Rajjo and apologizes to her for humiliating her with words like ghanti, zero, lice etc.

She praises Rajjo for seeing through Urvashi’s play and saving her suhag (Arjun) even when she herself couldn’t save her son.

She apologizes to Arjun for forcing him to marry Urvashi even when he was married to Rajjo.

However, Rajjo tells her about the divorce paper that Arjun made her sign.

Rajjo requests Madhu to let her go and Arjun agrees with her and names their meeting as a fate play.

Madhu calls their marriage a sign of fate and tells them she will not let Rajjo go as she is Arjun’s wife and the youngest daughter-in-law in the Thakur house.

Everyone smiles while Arjun tells Madhu that Rajjo is very eager to go from here and he knows what’s in her heart.

Rajjo taunts Arjun for kicking her out of his heart and reveals that he was planning to settle in America after marrying Urvashi.

Madhumalti looks at Arjun shocked as she never knew about Arjun’s idea of settling in America.

Arjun and Rajjo start to fight verbally but Madhu interrupts them and asks Rajjo where are her sindoor and mangalsutra.

Rajjo exclaims that she removed the sindoor and mangalsutra and taunts Arjun while recalling the day when he told her that she is suffocating him with her presence in his life.

Arjun's eyes fall to the floor ashamed and he accuses Rajjo of remembering too much.

Rajjo cries stating that how can someone forget his hurtful words and the day of his freedom.

Madhu brings the divorce papers and burns them to show that a piece of paper does not hold power over the auspicious beads of mangalsutra.

Meanwhile, Manorama decides to come out of the room to participate in the conversation.

However, Pushkar sees her and shuts her mouth with his hand and drags her to the room.

He locks the door and Manorama laughs loudly taunting him of being scared.

Furious Pushkar holds Manorama’s both arms harshly and accuses her of never forgetting her memory.

In the living room, Madhu begs Rajjo to stay as she will lose her world if she goes away.

Madhumalti and Chirag persuade Arjun and Rajjo to let go of their stubbornness and accept each other.

Both Madhu and Chirag use Sia as an example who speaks the truth that she wants Rajjo to marry Arjun.

Meanwhile, Rajjo drop tears and looks at Arjun to understand what his heart wants.