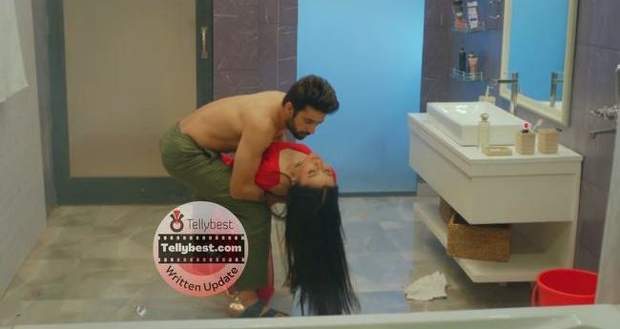 Today's Rajjo 16th January 2023 episode starts with Arjun asking Madhumalti what she has fed Rajjo, however, Madhumalti says that she hasn't given anything to Rajjo but has only dressed her up.

The doctor says that the allergy can be from smells as well. Arjun again asks Madhumalti if she has applied anything on her to which Manorma interjects and says that Rajjo might have smelled the Jasmine flower somewhere because that has always made her sick as a kid.

Later, Manorma says that she will not let Rajjo meet anyone alone for a few days.

Chirag senses that there is a weird tension between Arjun and Madhumalti as he has never seen Arjun talking rudely to Madhumalti before.

Meanwhile, Arjun goes to Madhumalti's room and finds the black magic-infused perfume in her room.

He goes to Madhumalti and starts blaming her for going after Rajjo's life by believing in superstitions and the Guru Ma.

Madhumalti says that he doesn't need to shout at her as whatever she's doing is just for Arjun's sake.

Chirag overhears their conversation and wonders why they are talking about Guru ma.

Arjun threatens Madhumalti that he will do something that will forever bring a halt to her games and says that he will go to the US forever so that Madhumalti never succeeds in carrying out her plan.

Arjun goes to Niharika and gives her some blank checks to hand over to Rajjo while he is in the US. Niharika insists Arjun not leave Rajjo and go but Arjun remains adamant about his decision.

Meanwhile, Pushkar asks the nurse at his academy to visit Rajjo's house and give her steroid injections in place of vitamin one so that Rajjo fails her drug test.

The academic nurse arrives in Rajjo's room and gives Rajjo the injection, however, the nurse mistakenly drops the bottle of steroids on the ground and does not notice it.

The nurse tells Rajjo that she has to come to the academy in an hour for the blood test and it is very important for the race.

Rajjo thinks to herself that Arjun has once again saved her life so she visits his room to thank him.

Arjun asks Rajjo if she is okay but she spots the wound on his leg and starts to look at it, however, Arjun stops her and asks her to stay away from him.

Rajjo says that if he hates her so much that why did he save her in the first place?