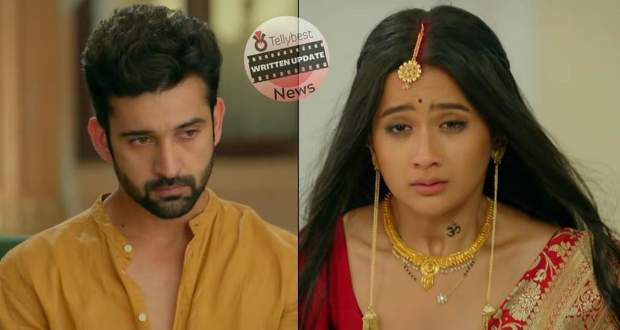 Today's Rajjo 16th October 2022 episode starts with the ladies of the Thakur mansion forming ideas on how to torture Rajjo.

However, Madhu and the boys silence them saying that it is too dramatic as they have watched dramatic serials.

Meanwhile, Urvashi tries to threaten Rajjo saying that no one will believe that she is after Arjun's money and that Rajjo is not.

Rajjo acts as if Arjun has caught them and smiles when Urvashi gets scared for her life.

Rajjo smiles and tells Urvashi that she has nothing to hide while Urvashi has to think about everything before speaking even a little.

Later, Rajjo comes to the hall where Madhu insults her and asks her what she wants now.

However, Rajjo says that it is Arjun she wants to talk to and takes him to his room.

Arjun stops before the entrance of his room and tells Rajjo to not even think about being in the same room as him.

Rajjo however tells him that she has something else to talk about and tells him to prepare a set of rules for their marriage and put it in a document.

Further, Rajjo sits by the Diyas while she calls Chachaji and asks him about Manorama.

Chachaji looks at Manorama through the glass panel and tells Rajjo that he disappoints her every time she asks about her mother's health.

However, Rajjo assures him that his being there with Manorama is more than enough.

On the other hand, Kalindi comes to Urvashi's room and tries to butter up to her while faking concern for Urvashi.

Meanwhile, Urvashi states that she knows that Kalindi is scared for her affair to be exposed.

Kalindi's eyes widen in surprise while Urvashi tells her to not frustrate her or else she will expose her to everyone.

Elsewhere, Rajjo and Arjun both sit with a notepad as they recall their memories with each other and write down conditions.

Later, the whole family gets together with Arjun and Rajjo in the hall to state each other's conditions for the marriage.

Arjun starts stating his conditions about Rajjo keeping silent about their marriage in public.

However, Rajjo keeps agreeing to all of Arjun's conditions and tells him to not waste time as she will agree to everything.

Arjun looks at her skeptically and tells her to speak her colorful list of conditions now and she just states that she wants Urvashi out of the house.

Madhu rebukes Rajjo while Arjun gets in her face and asks her how dare she says that.

© Copyright tellybest.com, 2022, 2023. All Rights Reserved. Unauthorized use and/or duplication of any material from tellybest.com without written permission is strictly prohibited.
Cached Saved on: Monday 21st of November 2022 12:46:09 AMCached Disp on: Wednesday 7th of December 2022 01:24:03 PM