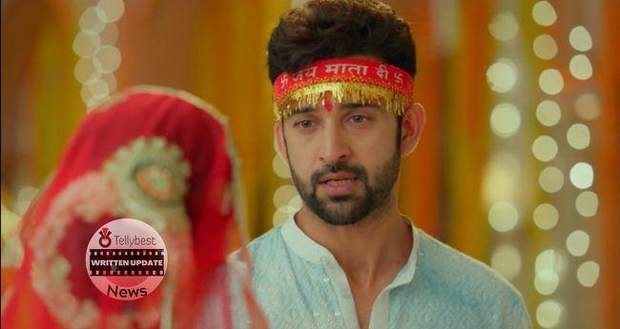 On the other hand, the warden tells the man to hurry up while Arjun enters the door.

In Arjun’s house, Madhu finds Arjun gone from home and gets furious and Kalindi instigates Urvashi about Arjun cheating on her.

Suddenly Madhu starts coughing and Manorama gives her water and assures her about Arjun's safety.

In the hostel room, Arjun throws a box at the warden in anger and beats the goons black and blue.

Walking to Rajjo’s bed, Arjun sees a cut on Rajjo’s body and blames himself for her situation.

In Thakur's mansion, Pratap asks where Arjun is and furious Madhu estimates that Arjun must be with Rajjo.

Meanwhile, Manorama gets happy hearing Rajjo’s name and prays to god that the Rajjo they are talking about is her daughter.

At the same time, Arjun picks up Rajjo's bridal style and takes her out of the hostel.

On the other hand, Manorama tries to ask Kavita about Rajjo but Kavita interrupts her and says she will clear her queries later.

Arjun enters the Thakur mansion screaming Chirag’s name and requesting him to call a doctor.

Seeing Rajjo in Arjun’s arms everyone gets shocked and Madhu confronts Arjun for taking Rajjo home.

During ascending the stairs Rajjo's scarf falls on a plant downstairs and Manorama sees the scarf.

Meanwhile, Pratap assures Madhu and Urvashi about Arjun’s actions but Urvashi gets jealous of Arjun holding Rajjo with her chest.

At the same time, Pushkar thinks he will kill the warden for messing up his plans and cranes his neck to see Arjun walking toward his room.

Meanwhile, Manorama cries holding Rajjo’s scarf and realises Rajjo is in Thakur's mansion and cranes her neck to see Rajjo in Arjun's arms.

Both Pushkar and Manorama run to the staircase but crash into each other.

Manorama gets shocked after seeing Pushkar and furious Pushkar grabs her hand and takes her aside.

In the living room, Urvashi says she needs to rethink her marriage with Arjun but Madhu assures her that Arjun will only marry her.

In Arjun’s room, Arjun puts Rajjo on the bed and apologises to an unconscious Rajjo.

Arjun sees her wound with guilty eyes and holds his side in pain.