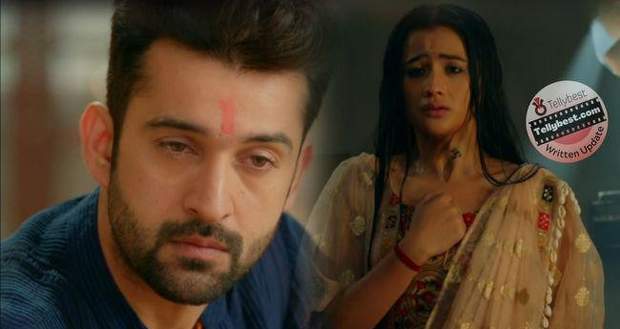 Today's Rajjo 17th December 2022 episode starts with Madhu telling Rajjo that she is a blessing for the whole family and requests her to accept Arjun as her husband.

Rajjo tries to refuse Madhu while Madhu pleads with Rajjo and asks her if she does not have any feelings for Arjun.

Arjun interrupts them and tells Rajjo to go and talk to her mother about it.

Further, Pushkar tries to threaten Manorama by telling her that the Thakur family will not accept Rajjo as the daughter-in-law of the family if they learn that she is his illegitimate child.

Pushkar holds Manorama's hands tightly to get her to comply while Madhu comes there and sees whatever is happening.

Pushkar tries to manipulate Madhu into thinking that Manorama is trying to trap him for his money and had even done the same thing 20 years ago when they had crossed paths.

However, Manorama tells her truthfully that he kept her in the dark and got intimate with her despite being married and left her when she got pregnant with Rajjo.

Madhu stops their drama and asks Pushkar how he can stoop so low while relief floods over Manorama's heart hearing someone finally believing in her.

Downstairs, the guests keep arriving while the family members also gossip about what is happening with Madhu.

Meanwhile, Rajjo tells Chirag that she needs to talk to her mother and leaves while Arjun goes and beats himself up for not believing in her.

Chirag comes there and tries to calm Arjun while Arjun says that he deserves this punishment for not being able to trust Rajjo against his own judgment.

Chirag tells Arjun that he will keep on regretting this but he needs to talk to Rajjo before it is too late.

Meanwhile, Rajjo calms herself by hiding behind a pillar and later goes to look for Manorama in her room while she bumps into Arjun.

Arjun helps her up while apologizing to her and asking for her forgiveness for not being able to trust her.

Arjun begs for forgiveness while Rajjo also breakdown into tears and lets out all the tears she was holding back.

Back in Pushkar's room, Madhu tells Pushkar to start silent and leave as she knows he hid this information from her as he knew it was his dark deeds.

Pushkar stays silent while Madhu tells him to leave without telling Kalindi anything and to remember that she is the mother-in-law of the family and his daughter.

Pushkar leaves while Madhu tries to apologize to Manorama.

However, Manorama tells her to not apologize as it was the first time in her life that someone supported her instead of scolding her for speaking the truth.

Madhu says that now their lives will be easier.

On the other hand, Rajjo cries as she asks Arjun what she should do with these sorry's and thank you's.

Rajjo tells Arjun that Madhu's words about their marriage being called off and now her asking to keep their relationship intact is making her brain scramble.

Meanwhile, Madhu tells Manorama to help her keep Arjun and Rajjo's marriage intact and Manorama says that she will convince Rajjo.

At the same time, Rajjo tells Arjun that she will do whatever Manorama tells her.

© Copyright tellybest.com, 2022, 2023. All Rights Reserved. Unauthorized use and/or duplication of any material from tellybest.com without written permission is strictly prohibited.
Cached Saved on: Wednesday 25th of January 2023 11:18:27 AMCached Disp on: Wednesday 1st of February 2023 07:13:05 PM