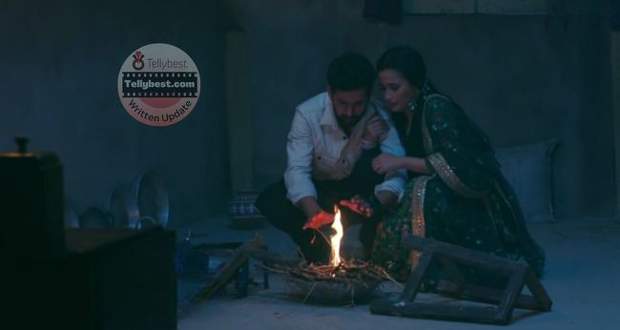 Today's Rajjo 17th January 2023 episode starts with Rajjo telling Arjun that if he wants to leave her he should leave her fully while Arjun is holding her hand.

Rajjo even orders Arjun to drive properly otherwise they will get into an accident and Arjun accuses her of diverting his attention.

A car suddenly appears in front of Arjun's car and they hit the tree.

Earlier that day, Rajjo tells Arjun that since he does not want to see her face, he should have let her die.

Rajjo even asks Arjun why he is not answering and Arjun slams the door in her face after announcing that he will do anything to keep her away from him.

After this, leaning against the door, Arjun feels upset whereas Rajjo also looks at the closed door with sad eyes.

Arjun then feels guilty for behaving badly with Rajjo since it was his last meeting with her before he boards a flight to the U.S.A.

When he opens the door, he gets worried as he does not find Rajjo anywhere and starts looking around the house for her.

At the same time, Arjun meets Manorama who orders him to give Rajjo the freshly cut fruits otherwise she will go for the blood test without eating anything.

When Arjun arrives outside the house, he finds Rajjo crying and telling herself that she knows Arjun must have a reason for behaving badly with her.

Rajjo gets a call just then and when she picks up, the speaker urges her to come for the test and Rajjo walks away.

Arjun watches Rajjo walk away and he reminds himself that he just wants to say “I Love You” before leaving.

Meanwhile, Manorama gets shocked when she finds a steroid bottle under a table and screams in a panic that Pushkar must have done this since he wants to destroy Rajjo’s name in the sports industry.

Afterward, Madhurama also gets stressed as she finds Rajjo’s phone only outside.

Meanwhile, inside the mansion, Chirag tells everyone about Arjun’s plan of going the U.S.A which makes Madhumalti break down in tears.

On the other hand, Manorama gets disappointed when not even a single auto driver agrees to take her.

Manorama then starts running to save Rajjo’s career whereas Rajjo is waiting in line in the academy and Pushkar thinks now Rajjo’s carrier will be over in no time.

Meanwhile, Arjun gets a call from Manorama who tells him that Rajjo is in trouble.

Later, when Rajjo is about to enter the medical room for the blood test, Arjun grabs her from behind and turns around.

Afterward, in the car, Rajjo asks Arjun why he did not let her take the blood test but Arjun drives the car ignoring Rajjo’s yelling.

A flashback shows Manorama telling Arjun about a nurse giving Rajjo steroids and Arjun promises to not let this happen.

Afterward, Rajjo and Arjun open their eyes to find themselves in each other's arms and they get out of the car.

Rajjo then again starts accusing Arjun of ruining her chance today but Arjun angrily reveals that the nurse has injected steroids in her blood so if she was tested she would have been banned from playing.