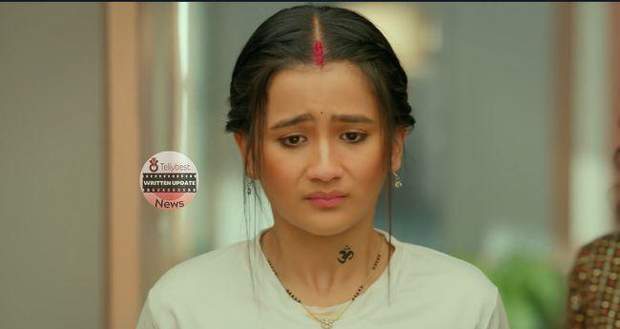 Today's Rajjo 17th November 2022 episode starts with Rajjo explaining to the receptionist about Arjun’s indigestion problem and asking him to give the keys so that she can prepare the medicine for him.

Arjun covers his face in embarrassment while Rajjo talks about his stingy farts and makes the receptionist scrunch his nose in disgust.

Arjun and Rajjo get the keys to the room and walk away from the reception while Rajjo starts laughing.

Arjun pushes Rajjo to the wall and asks her to stop spouting nonsense in front of other people.

Rajjo asks Arjun to calm down while the receptionist asks them to do all that after getting into their room.

Arjun calls home and informs them that he is all right and asks if there is any new update about Urvashi.

Madhumalti asks Arjun whether he has taken his medicines while Chirag informs him that he will reach Tulsipur the next morning.

As Arjun says that he will not eat anything brought by Rajjo, Rajjo gets heartbroken by his remarks and silently walks away when Arjun hangs up.

After entering their room, Arjun lies down on the mattress while Rajjo comes to him with his medicines.

Rajjo hands over the medicines to Arjun which he takes without any complaint.

Suddenly, the electricity goes out, and Rajjo fans Arjun with her dupatta while he sleeps soundly.

Rajjo lies down beside Arjun with the pillow between them but it eventually gets removed from there overnight.

Arjun and Rajjo sleep in each other’s arms and get stunned to see themselves in that position the next morning.

Rajjo and Arjun reach the panditji and ask him about the car seen in the footage to which he tells them the address.

However, they could not find anyone after reaching the address.

Meanwhile, the family members receive another threat video where Urvashi asks for help while an anonymous man points a gun at her.

The video ends with a gunshot, horrifying the family members.

Kalindi calls Chirag and explains to him, Arjun, and Rajjo about the video in a sad tone.

Just then, another video comes in where Urvashi is seen to be still alive making the family members sigh in relief.

Arjun sees the video and burns in anger while Rajjo and Chirag wonder where the kidnappers could be.

© Copyright tellybest.com, 2022, 2023. All Rights Reserved. Unauthorized use and/or duplication of any material from tellybest.com without written permission is strictly prohibited.
Cached Saved on: Monday 21st of November 2022 01:40:53 AMCached Disp on: Thursday 1st of December 2022 12:37:48 PM