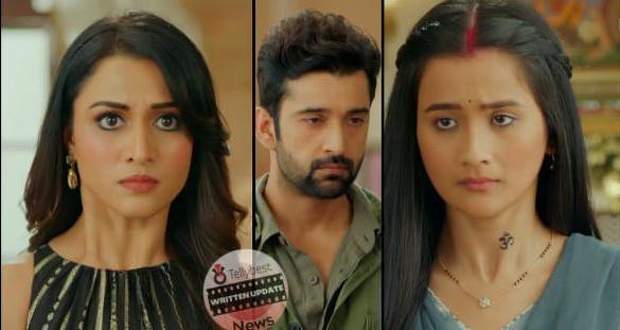 However, Arjun just glares at Rajjo and leaves from there followed by the family members.

Urvashi thinks that she has to do something now that Rajjo has challenged her to remove her from the Thakur house.

Elsewhere, Pushkar thinks about Rajjo's drama and wonders how she has trapped Arjun in her palms.

Pushkar thinks that he has to get rid of Manorama so that he can focus on getting rid of Rajjo.

Back at the Thakur house, Urvashi goes to Arjun's room and starts decorating the room while he is in the shower.

However, Rajjo comes there and pops the balloon decoration while demanding Urvashi leave.

Urvashi leaves while Arjun gets angry at Rajjo and starts scolding her when they both slip and land on the bed.

Rajjo recalls how she entered the Thakur house and tells Arjun that she won't come in front of him again.

Further, Rajjo brings the stair and climbs the cupboards saying that she will be out of his eyes.

Feeling frustrated, Arjun takes a pillow and leaves the room stating that he will not share a room with her.

Later, Rajjo admires Arjun sleeping on the balcony bench from afar and goes to cover the blanket on him.

However, the blanket moves because of the wind, and Rajjo again fixes it after which she sleeps in the chair inside the balcony.

The next morning, Arjun wakes up feeling surprised that he doesn't have any pains or body strains.

Madhu comes there just then and angrily asks him why he was sleeping on the balcony.

Arjun says that it was because of his wife and goes inside his room followed by Madhu.

However, Rajjo is not in the room and the son-mother duo talks badly about her when Arjun gets a call from his paragliding friend, Shikhar.

Shikhar tells Arjun that both he and his friend, Anish are coming to Thakur mansion to meet Arjun's wife.

Meanwhile, Rajjo is in the hospital requesting Manorama to wake up while the doctor comes there and informs them that Manorama is in a coma.

The doctor tells them about the hospital expenses and leaves while Rajjo promises that she will arrange the money and take care of her.

Back at the Thakur house, the family members are advising Arjun while Jhilmil tries to insult Arjun.

Madhu silences her by saying that Mukund has made even more mistakes than Arjun.

Madhu says that she will not let Rajjo be introduced as the daughter-in-law of the Thakur family.

Urvashi comes there and tells them that she has an idea and states that she is ready to act as Arjun's wife in front of his friends.