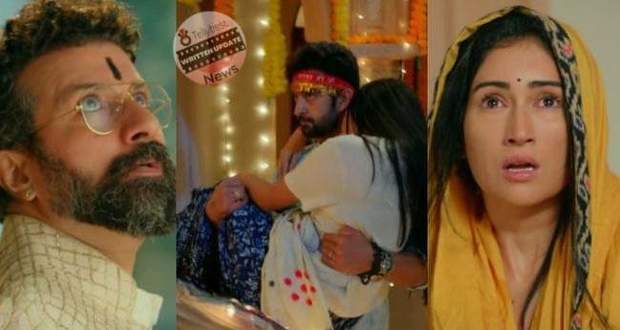 On the other hand, Pushkar insults Manorama for training Rajjo into prostitution so she can seduce Arjun.

Pushkar compares Rajjo with Manorama as she used to roam near Pushkar like this.

Meanwhile, the doctor stitches Rajjo's wounds and states that the next 48 hours are crucial for her.

Hearing the doctor's words, Arjun's heart takes a dip and he wipes her dirty feet with a cloth and Madhu snatches the cloth from him.

Meanwhile, Arjun retorts to Madhu and tells her that he is enduring Rajjo’s fragile state with a heavy heart.

Manorama warns Pushkar to not take Rajjo’s name from his dirty mouth and furious Pushkar grabs her neck.

On the other hand, Madhu tells Arjun to take Rajjo out of her house but Arjun requests her to stay in the Thakur mansion for 48 hours.

Meanwhile, Manorama assures Pushkar that she is not going to tell his family about his fling with her.

In the corridor, Arjun tells Madhu about Rajjo’s near-death experience.

Later, Pushkar threatens Manorama to tell Rajjo about their fling and she gets scared by his threats.

Manorama begs him to not tell the truth to Rajjo and assures him that she will do anything he wants.

In the corridor, Arjun declares he is going to save Rajjo irrespective of her cast, colour and financial status.

Madhu agrees with Rajjo living in Thakur's mansion but tells him Rajjo will not live in his room.

Afterwards, Madhu shifts Rajjo to the store room and finds Pushkar to ask about Rajjo's mother.

In the living room, Pushkar introduces Manorama as Rajjo’s mother and Arjun gets happy seeing her.

Arjun recalls Manorama taking Rajjo out of the race in NeelTaal.

In the storeroom, Rajjo is lying on the dirty floor half-conscious and takes Khan Babu's name.

Meanwhile, Kalindi recognises Manorama as Kavita’s staff and Pushkar lies that he found her from the name.

To get to know more, download Rajjo Hindi Serial for all episodes or watch online today's (17 September 2022) latest full episode, go to hotstar.com