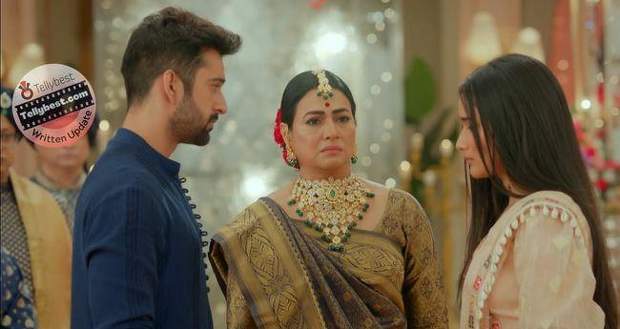 Today's Rajjo 18th December 2022 episode starts with Rajjo getting hiccups from crying and Arjun pulls her close from her waist to support her body with his.

Arjun touches their nose and states that his remedy to cure hiccups is to give a shock to the other person.

In the corridor, Kalindi stands beside Chirag and asks him what he thinks will happen now.

Chirag prays to Ram Ji to do what is best while Kalindi touches his hand slowly and holds it tightly.

Both Kalindi and Chirag leave a breath of relief feeling each other's warm touch in the cold atmosphere.

In the room, Rajjo and Arjun decide to search for Manorama and Madhu.

Rajjo says that maybe Madhu has realized her mistake and is feeling guilty that's why she wants her to become her daughter-in-law.

However, Arjun defends his mother saying that a person always tells the truth when a person trusts others.

Taking Arjun’s advice, she questions him about what he wants.

Meanwhile, Madhu requests Manorama to not tell the truth about Pushkar being Rajjo’s father.

Madhu gives a reality check to Manorama that Rajjo is finally getting her husband’s name, unlike her fathers.

She tells Manorama that the world will not accept Manorama and Pushkar’s love and will name Rajjo an illegitimate child.

Madhu imagines Kalindi finding out about the truth and fighting with Rajjo while Arjun and Chirag will start to fight with each other because of their wife's fights.

Manorama holds Madhu’s hands and promises her that she will never tell the truth about Rajjo’s father to anyone.

Madhu also promises her that she will not tell anyone, even Pratap.

Later, in the living room, Madhu and Manorama announce that the decision is only Arjun and Rajjo’s and they are ready for this marriage.

Manorama and Madhu take Arjun and Rajjo in front of the idol.

Madhu and Manorama apologize to them and state that they are bonded by fate.

Manorama states she wants Rajjo to become husband and wife and everyone smiles brightly.

Madhu and Manorama leave the decision of marriage to them and Chirag urges them to marry.

Meanwhile, Arjun and Rajjo stand still and Swara and Kalindi put the accessories of bride and groom on them.

Both Arjun and Rajjo ask their mothers if they really want this and they both agree.

The family members shower flowers on Arjun and Rajjo while they hold the garlands.

Arjun fills Rajjo’s hairline with vermillion and binds mangalsutra on her neck while she closes her eyes.

Rajjo looks into Arjun’s eyes with confused emotion as she doesn’t know if he wants her again or not.

However, Chirag announces that the wedding of Arjun and Rajjo is complete.

© Copyright tellybest.com, 2022, 2023. All Rights Reserved. Unauthorized use and/or duplication of any material from tellybest.com without written permission is strictly prohibited.
Cached Saved on: Wednesday 25th of January 2023 08:57:58 AMCached Disp on: Monday 6th of February 2023 06:24:00 AM