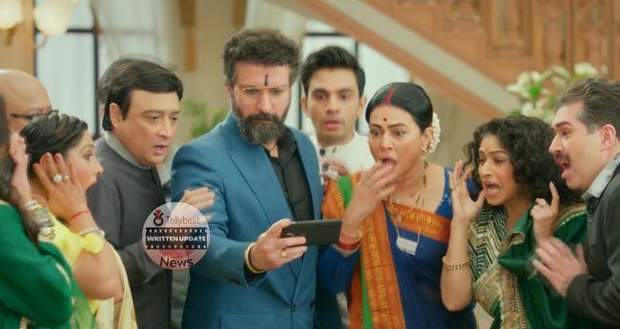 Today's Rajjo 18th November 2022 episode starts with Urvashi telling Arjun that her kidnappers have only fired the first shot as a warning but next time they will fire to kill her.

She also tells him the location near Gomti for dropping off the money and requests him to not inform the police about it this time.

Later, Arjun tells Rajjo and Chirag to not say anything to the police and decides to go to the location given by Urvashi.

Meanwhile, Kalindi tells the family about Arjun’s message that he is going to the Gomti Pull.

Urvashi’s mother begs Madhumalti to save Urvashi while Arjun’s parents tell her that to not worry as money has been arranged and they will save Urvashi too.

On the other hand, Rajjo asks Arjun to drive slowly as she cannot see him in pain.

Arjun gets angry at Rajjo’s concern while Chirag tells her to relax as the road is bumpy.

Arjun worries about Urvashi and misunderstands Rajjo’s concern and gets irritated at her.

Chirag takes Rajjo’s side and tells Arjun to not misunderstand Rajjo.

Arjun is feeling guilty for ditching her on her engagement despite all the things she has done for his family.

Arjun also blames Rajjo for being responsible for all the problems with Urvashi and for taking away his peace of mind ever since she has come into his life.

Rajjo feels hurt and recalls Urvashi’s true character when she admits that she is after Arjun’s money.

Meanwhile, the Thakurs are ready to leave and tell Pushkar to take his gun with him too.

Pushkar is scared and tells everyone it will not be wise for them all to go as it may spook the kidnappers.

Later, Arjun and Thakur’s meet at the midpoint to give money to Arjun while Madhumati asks him if he has taken the medicine.

Rajjo tells her that she has given the medicine to Arjun but Madhumalti ignores her.

Taking the money bag from Madhumalti, Arjun assures Urvashi’s parents that he will bring Urvashi back safely.

Arjun tells everyone to hide behind something to not be seen by kidnappers.

Rajjo rubs two stones together to create a spark and tells Chirag that in her village doing this will keep Arjun safe as her villagers believe.

Arjun is hiding behind the tree after dropping the money while Rajjo worries about his health and hasn’t recovered yet.

Later, Rajjo makes a shade of leaves for Arjun to keep him from feeling hot and airs him with his Dupatta to keep him cool.

Meanwhile, Madhumalti calls Arjun to come to her while Rajjo stands alone.

After a while, the kidnappers come and leaves after taking the money without dropping Urvashi.

Rajjo runs after them while Arjun follows her but they fail to catch the kidnappers and Rajjo falls trying to jump on the car.

Arjun scolds Rajjo for running after the car as if it is a movie.

Chirag also berates her lovingly for risking her life while Rajjo tells him that it is Arjun who has risked his life and given money to the kidnappers as well and yet everything has gone to waste.

Feeling out of breath and weak, Rajjo rests her head on Arjun’s shoulder.

Later, Arjun carries her to their bedroom and scolds Rajjo for jumping into things without any thought for her safety.

Rajjo looks lovingly at her Khan Babu while Arjun applies medicine to her scratches.

© Copyright tellybest.com, 2022, 2023. All Rights Reserved. Unauthorized use and/or duplication of any material from tellybest.com without written permission is strictly prohibited.
Cached Saved on: Monday 21st of November 2022 09:30:00 AMCached Disp on: Thursday 1st of December 2022 12:37:28 PM