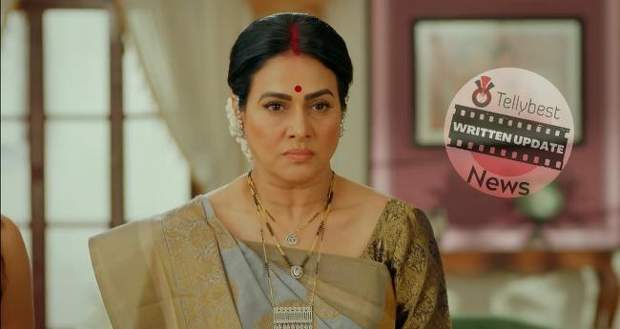 Today's Rajjo 18th October 2022 episode starts with Urvashi telling the Thakur family that she is ready to be Arjun's wife in front of his friends.

Madhu and the rest of the family members also like the idea except for Arjun who says that he does not want to cover one lie with another lie.

Madhu says that it is not a lie as he and Urvashi will get married soon and they will soon get rid of that greedy Rajjo.

Back at the Thakur house, Arjun greets his friends and they are just meeting Arjun's wife, 'Urvashi' when Rajjo comes behind her.

The friends greet Urvashi and give her a bouquet to congratulate her on the marriage.

Further, the friends are insisted to have snacks with tea and they tell Rajjo to get it mistaking her for the maid of the house.

Feeling humiliated as Madhu joins them and orders Rajjo around like a maid, Rajjo leaves from there and cries in the kitchen.

Swara comes there just then and tells her that she will do it as she doesn't want Arjun's friends to see Rajjo's ignorance.

Swara says that she took the whole family's happiness and uses the microwave and the stove as Rajjo watches with fascination.

Afterward, Rajjo takes the tray of snacks and goes to the hall where Madhu orders her to serve the guests.

However, Arjun being the nice guy stands up and tells his friends to serve themselves and not act entitled.

Back at the hospital, Nangu Kaka goes to get water while Pushkar manages to get inside Manorama's ward and threatens her saying that he will always win against her.

Pushkar removes the oxygen mask and puts it back once she struggles while saying that she will die a suffering death.

On the other hand, Madhu insults Rajjo by saying that she is equivalent to the maid of their house.

Jhilmil and Urvashi also join in on insulting Rajjo while she stands up and says that she doesn't feel bad because they are misunderstanding her, but rather because they are deeming something right when it is wrong.

Arjun looks at her and seeing her already looking at him, feels that the statement was directed toward him.

© Copyright tellybest.com, 2022, 2023. All Rights Reserved. Unauthorized use and/or duplication of any material from tellybest.com without written permission is strictly prohibited.
Cached Saved on: Monday 21st of November 2022 06:48:27 AMCached Disp on: Tuesday 29th of November 2022 11:08:08 AM