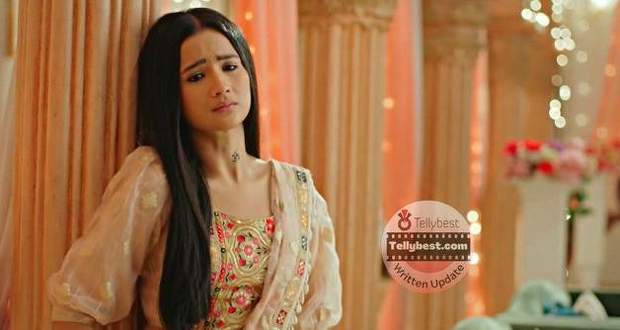 Today's Rajjo 19th December 2022 episode starts with Pushkar raging in fume after Madhumalti humiliated him and throws a vase on the floor.

Madhmalti stands behind him and states that he can throw one vase on her head also but he needs to listen to her.

In Arjun’s room, Arjun and Rajjo stand awkwardly when he starts to remove his clothes and she runs to close the door.

Arjun sees Rajjo with a confused expression and she lies that she is habitual of hiding inside his room.

Meanwhile, Madhu tells Pushkar that she loves Arjun blindly so she does not even see humanity if Arjun's life is in danger.

Madhu exclaims that she has trapped the parrot in her house who is the key to her son's life.

Madhu informs Pushkar that Arjun has an Akal Mrityu dosh (Untimely Death) in his horoscope so she staged the wedding.

She blames Rajjo for catching Urvashi when she was about to marry Arjun so her last resort was Rajjo only.

Madhu compares her love for Arjun to Puhskar's love for Kalindi as he is kicking Rajjo out because he does not want Kalindi to know about her.

She evilly says now it's Rajjo’s dharam to save Arjun.

When Arjun will make love to Rajjo the life risk will get transferred to Rajjo that’s why Madhu decorated his room herself.

In Arjun’s room, Arjun makes space for Rajjo in his cupboard.

Out of habit, Rajjo asks if he wants her to hide in the cupboard but Arjun refuses as they did this only because of Urvashi.

At the same time, Naman and Arjun’s brother knock on the door to tease Arjun and Rajjo.

Meanwhile, both Arjun and Rajjo’s shoulders crash and they get lost in each other's eyes.

Arjun opens the door and the boys take him away to party after apologizing to Rajjo for taking her groom.

In Pushkar’s room, Pushkar sarcastically says that Madhu reminds her of his father who died due to his weird superstitions.

Later, Madhu tells Pushkar that she doesn’t care whether Rajjo lives or dies and blames him for connecting a relationship with a poor person as he is the legitimate father of Rajjo.

In Manorama’s room, Manorama is happy that Rajjo is finally going to live a happy life.

She thinks that Madhu’s words of not telling the truth about Pushkar to Rajjo are correct.

At the same time, Rajjo barges into the room and hugs her Maai.

They sit on the bed and Manorama tells her that she is happy that she found Arjun.

However, Rajjo asks her if she recalls the person who crashed the car into her.

Rajjo inquires how Manorama got her memories back but she lies saying she doesn’t remember anything about the accident.

© Copyright tellybest.com, 2022, 2023. All Rights Reserved. Unauthorized use and/or duplication of any material from tellybest.com without written permission is strictly prohibited.
Cached Saved on: Wednesday 25th of January 2023 11:36:21 AMCached Disp on: Monday 6th of February 2023 06:23:36 AM