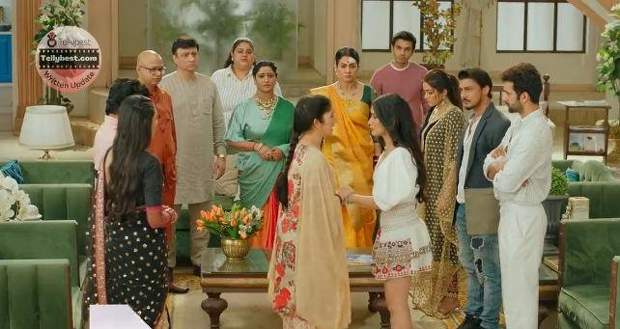 Today's Rajjo 19th January 2023 episode starts with Guru Ma coming to the house herself while Madhumalti cries her heart out to her and says that Ayaan and Rajjo did not consummate their marriage and Arjun has already left for the USA.

Guruma says that she cannot do anything now since it was only Rajjo who could have protected Arjun from the curse.

Meanwhile, Rajjo notices that Arjun has a high fever and lays him down to keep him warm.

Rajjo says that she is going to fetch more wood or the fire will die out.

However, Arjun stops her and asks her to stay close to him so Rajjo lays next to him while Arjun hugs her tightly and says that he will not lose Rajjo at any cost and will protect her as he is deep in….

Rajjo asks him to complete his statement as she is dying to hear it but Arjun stops and tells himself to get away from Rajjo.

Rajjo says that what happened all of a sudden after all they were so close.

However, Arjun tells her to forget everything that happened and go along with him to take a lift from outside to go back to the house.

Rajjo hugs him from behind and says that they should stay here till the afternoon but Arjun pushes her away and says that he is sick and that is why she shouldn’t come closer.

Rajjo yells at him that why is he being bipolar as just a few moments before he was confessing his love for her.

Arjun says that it was not a confession of love but was a meaningless gibberish due to high fever.

Rajjo says that she knows he is not telling the truth and something is going on which is preventing him to be near her.

Arjun again pulls back rudely and steps out of the hut along with Rajjo.

Rajjo gives Arjun the flight tickets that he left at the hut and says that it is so easy to create distance physically using paper but for distance at heart, only a mere action can do the job.

Rajjo asks Arjun to quickly go now so that she has time to get over him while Arjun looks at her with helpless painful eyes.

Meanwhile, Manorma gets a call from Arjun who tells her that he is on his way back while Madhumalti angrily snaps at her for not letting her talk to her son with tears in her eyes.

Manorma tells her that Arjun is not in America but is here in Lucknow along with Rajjo and is on his way back home.

Chirag looks at Madhumalti and thinks why is she being so dramatic?

Meanwhile, Arjun takes Rajjo to the academy to give her blood samples as it is necessary for her race.

Pushkar enters and says that her blood will not be considered for the test as she ran away yesterday from the academy when she had to give the test.

Arjun says that yesterday Rajjo was with him the entire day and it is their personal matter.

A nurse enters and says that Rajjo’s blood is fine without the presence of an illegal substance which clears her for the race.

However, Pushkar still disqualifies Rajjo from the race by tearing her blood report into pieces.

© Copyright tellybest.com, 2022, 2023. All Rights Reserved. Unauthorized use and/or duplication of any material from tellybest.com without written permission is strictly prohibited.
Cached Saved on: Wednesday 25th of January 2023 09:07:56 AMCached Disp on: Wednesday 1st of February 2023 08:19:48 PM