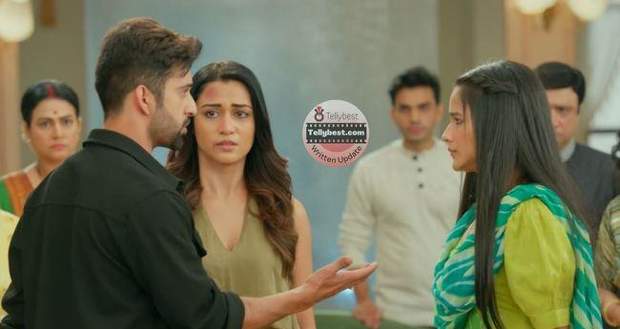 Today's Rajjo 19th November 2022 episode starts with Arjun applying medicine to Rajjo’s wounds while she eats him with his eyes.

Later, Rajjo comes out of her reverie and realises that it was just a daydream.

Meanwhile, Urvashi’s mother asks her husband why did the kidnappers not release Urvashi.

She also tells him to call the loan shark to who Urvashi owes money.

Dheeraj calls the loan shark but gets more worried that neither they have the girl nor the money.

Meanwhile, Jhilmil asks for Pushkar whose wits and guidance are needed the most in this situation.

In the meantime, Arjun comes to Rajjo with a bandage while Rajjo questions his presence and whether it is a dream as well.

Seeing the cute bandage, Rajjo admires it while Arjun gets angry and tells her that she could have been badly hurt while running after the kidnappers and asks her why she did it.

Rajjo tells him that she did it for him which makes Arjun stare at her angrily.

After a while, Arjun, Chirag, Rajjo, their parents and police officers are standing at the location trying to understand where Urvashi can be.

Just then Rajjo spots the car and the kidnapper getting out of it and runs to tell Arjun.

As they are about to go inside Rajjo gets a call from Nangu Kaka but Arjun asks her to disconnect it.

Meanwhile, Pushkar scolds someone on the phone and tells them to remove something and someone from there and he will shortly follow.

Later, police, Arjun, Chirag and Rajjo come inside and surprise the kidnappers.

All of them beats the hell out of the kidnappers and Arjun stops him from running away and unmasks him.

Arjun is shocked to see Vicky as one of the kidnappers.

Once the kidnappers are caught, Urvashi and Arjun’s parents arrive at the scene and hug Urvashi.

Arjun asks Vicky to tell him who is behind the kidnapping but the police tell him that he cannot interrogate Vicky as he is in her custody.

However, before leaving, Vicky apologises to Rajjo and tells her to not worry as he will not tell anyone about her.

Rajjo looks puzzled at Vicky’s apology and tells Arjun that she has nothing to do with him or the kidnapping.

However, Arjun looks at Rajjo vehemently and tells Rajjo that there must be something that she is hiding and that Vicky specifically addressed her.

Urvashi also tells Arjun that it must be Rajjo after her kidnapping and reminds him that Vicky was Rajjo’s ex-fiance.

Rajjo continues to defend herself and accuses Urvashi of orchestrating the whole kidnapping.

Arjun tells her to not speak another word.

Later at home, Arjun and Rajjo continue to argue while Arjun tells her to tell the truth and accept that she is behind the kidnapping.

Rajjo tells him that she is not the kidnapper and accuses Arjun of not understanding anything and believing in Urvashi who is after his money.

She also reminds Arjun of Vicky’s nature who can stoop as low as possible and might be taking revenge on them both.

© Copyright tellybest.com, 2022, 2023. All Rights Reserved. Unauthorized use and/or duplication of any material from tellybest.com without written permission is strictly prohibited.
Cached Saved on: Monday 21st of November 2022 12:51:21 AMCached Disp on: Saturday 10th of December 2022 02:48:09 PM