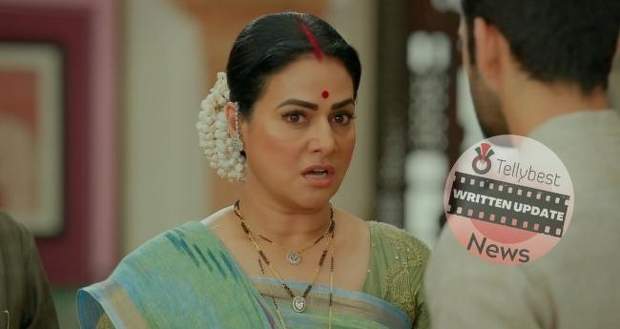 Today's Rajjo 19th October 2022 episode starts with Madhu saying that Rajjo will just have to bear the insults every day while being silent.

However, Rajjo stands up and contradicts all of Madhu's statements stating that she will make Urvashi taste the dirt.

Rajjo leaves while Madhu instigates Arjun and makes him go after Rajjo.

Arjun grabs Rajjo by the elbow and starts arguing with her saying that she is dumb if she thinks that she can protect him.

Rajjo also talks back to Arjun and tells him that she will fulfill her promise of protecting him the same way he saved her from Vicky.

Blind in his anger, Arjun tells Rajjo that if she's ready to be a maid, then she should be introduced to it properly and drags her to the hall.

Further, Arjun rings the bell in his hand and circles Rajjo while declaring that she is the housemaid from now on.

Madhu and Jhilmil get happy as Madhu gives Rajjo a list of labor work to do.

Later, Rajjo is cleaning Arjun's car with him inside when she realizes that it is almost time to meet Manorama.

Rajjo leaves her work in the middle and runs to the hospital where she sees Pushkar and Nangu Kaka tells her that he was in Manorama's room.

Back at the Thakur house, Madhu gets angry when she rings the bell and Rajjo doesn't come.

Further, as soon as Rajjo returns home, Madhu insults her and makes her polish the shoes of the gents' family members.

Rajjo sits with the items without any problem while Pushkar comes there and makes her polish the shoes like a shoe polisher to insult her even more.

At the same time, Chirag goes to Arjun and tells him about Rajjo having to polish shoes and getting insulted while Arjun does not react to the news.

Meanwhile, Rajjo tells Pushkar that she saw him at the hospital and demands to know why he met her mother.

However, Pushkar lies that he's the trustee of the hospital and went to meet everyone at the hospital.

To get to know more, download Rajjo Hindi Serial for  all episodes or watch online today's (19 October 2022) latest full episode, go to hotstar.com

© Copyright tellybest.com, 2022, 2023. All Rights Reserved. Unauthorized use and/or duplication of any material from tellybest.com without written permission is strictly prohibited.
Cached Saved on: Monday 21st of November 2022 09:16:38 AMCached Disp on: Tuesday 29th of November 2022 11:07:52 AM